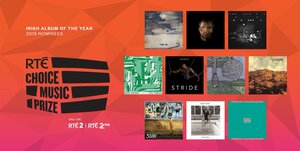 The shortlist for this year’s RTÉ Choice Music Prize Irish Album of the Year 2019, in association with IMRO & IRMA, was announced by Jim Carroll, chairman of the judging panel.

The Irish Album of the Year 2019 will be revealed at a Live Event on Thursday March 5, 2020 in Vicar Street, Dublin and will be broadcast live on RTÉ 2FM in a special four hour extended programme from 7-11pm,

The Choice Is Theirs