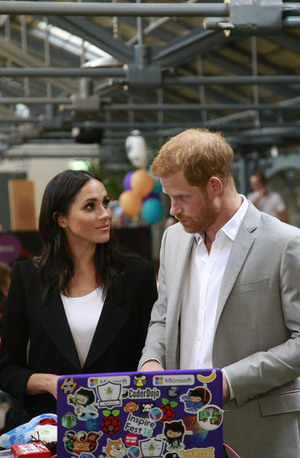 Britain’s Duke and Duchess of Sussex Meghan Markle and Prince Harry during their visit to the DogPatch labs, Custom House Quay, Dublin in July 2018

It is understood that Queen Elizabeth and the Prince of Wales were not aware of the content of Harry and Meghan’s personal statement before it was issued.

The couple said they will work to become financially independent while continuing to “fully support” the Queen.

But a palace spokeswoman said: “Discussions with The Duke and Duchess of Sussex are at an early stage.

It was not immediately clear how Harry and Meghan would achieve financial independence, although last year it was reported that Harry would be executive producer of a documentary on mental health with Oprah Winfrey, for Apple’s video streaming service….

Will line of succession to the throne change now Prince Harry has quit? (Metro)

Buckingham Palace warns Harry and Meghan about ‘stepping back’ (RTÉ)