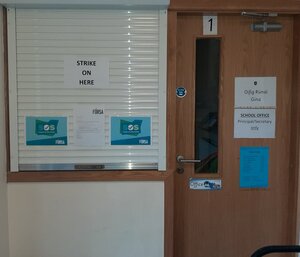 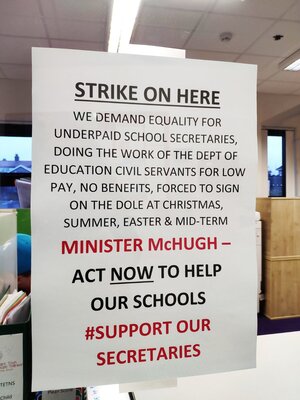 School secretaries are on strike! pic.twitter.com/JZAfh07dvc

Some 1,000 school secretaries will hold a one-day strike as part of an ongoing campaign against a controversial two-tier pay system.

“Today’s nationwide strike action by school secretaries represented by Fórsa trade union is to be followed by a resumption of their work to rule, which was suspended in October 2019 in order to facilitate discussions at the Workplace Relations Commission (WRC).

The dispute is over the continuing two-tier pay system that leaves most school secretaries earning just €12,500 a year, with irregular, short-term contracts that force them to sign on during the summer holidays and other school breaks.

Fórsa represents more than half of the estimated 2,000 school secretaries employed directly by their school’s board of management and paid from the school’s ancillary grant.

Most of the remaining estimated 1,000 school secretaries are employed directly through the Education and Training Boards (ETBs), while a very small number, who were hired before 1978, are directly employed by the Department of Education.

The vast majority of school secretaries working in Ireland are women.

The decision to take strike action and resume the work to rule followed what the union described as an ‘insulting and derisory’ offer of 1.5% at the WRC last December.

Talks have been taking place since October.

The resumed work to rule action will mean that school secretaries will withdraw from work on public service systems and databases.

They will also refuse to carry out the functions of public servants.

This is because they have repeatedly been refused public service pay and conditions over the last four decades.”

5 thoughts on “School’s Out”