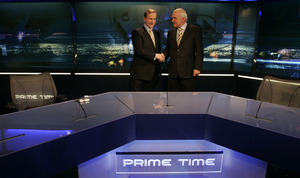 From top: then Fine Gael Leader Enda Kenny and then Taoiseach and Leader of Fianna Fail Bertie Ahern in the RTÉ Prime Time studio for the General Election 2007 TV Debate, May 18, 2007; Dan Boyle

Head to head debates during election campaigns rarely have the consequences they are portrayed as having. The format is unsuitable for the collective short term attention span we have evolved in having.

The winning is in perception, often informed by the superficial, and when it is by anything said it is by the glib soundbite than by any profound truth spoken.

The Kennedy/Nixon debate in 1960 launched the template of modern political intercourse, a template that has barely altered since.

Kennedy was deemed to have won the debate by virtue of appearing younger and more vibrant. Those who listened to the debate on radio, where greater consideration could be given to tone and content, marked the debate a draw.

Since then most set pieces seem to have become reduced to an incessant search for a zinger. The telling phrase, as short as possible and easily remembered.

Even when achieved they often have little effect on the eventual outcome.

When Lloyd Bentsen put down the embarrassingly ineffectual Dan Quayle in 1988, it didn’t stop George Bush Snr. becoming US President, nor Quayle his Vice President.

If the format has varied very little and its effect has been largely oversold, there have been examples when changing numbers taking part in a debate has had some effect.

In the US in 1992 and the UK in 2010 the introduction of third candidates did seem to affect voter behaviour.

Ross Perot and Nick Clegg took advantage of their participation in debates to gain greater support for their political platforms.

What third candidate participation achieved after these debates was not the breakthrough of a competing ideology, rather it identified a receptacle for the plague on both your houses vote.

While both Perot and Clegg achieved significant votes, because of the electoral college in the US, and first past the post in the UK, neither achieved an impact their votes would have had under a more proportionate system.

The history of head to head candidate debates in Ireland has hardly been littered with stellar moments. Because of that it can’t be claimed that such debates have been campaign defining or changing.

The last such significant debate was held between Bertie Ahern and Enda Kenny in the general election campaign of 2007. Neither had ever had been thought of as skilled debaters. Those expectations were met.

Modern politics has ‘developed’ to such an extent that, through an army of consultants and advisors, image has become paramount; content a potential trip zone.

If the main protagonists look the same, sound the same, behave the same and largely believe in the same things; how are they meant to be differentiated?

In the Ahern/Kenny 2007 debate Ahern was perceived to have had won because he was thought to be the more competent manager. Managing to keep a smooth running economy perform to expectation. That was what it was thought the electorate wanted.

We learn little from these debates. At best they confirm whether momemtum exists and can be sustained.

Despite protestations during every election campaign that many voters have yet to make up their minds up, most have. It is thought that on election day of those who vote, eighty per cent of those voters vote as they would do on day one of an election campaign.

Except under our system it is how votes subsequently transfer that determines the third, fourth and fifth seats in most constituencies. That is well worth continuing to argue over.

4 thoughts on “Dan Boyle: All Talk”