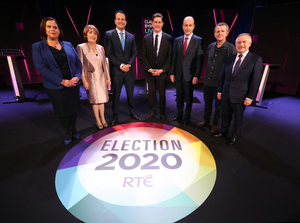 During a televised debate the Christmas before last, Fr Peter McVerry said, that there was no urgency in the government to address the homelessness crisis.

This official complacency was a feature of the conservative attitude during the leaders’ debate, a complacency that seemed to be echoed by the mainstream media pundits.

The media punditry began on RTÉ immediately after the debate and, like much of the attitude of the conservative parties, was characterised, not by urgency, but by a sense of novelty, of a happy late-night knees up as a “winner” was sought.

The message being that the debate was a bit of harmless sport staged for everyone’s amusement. Not to be taken too seriously. A contest the pundits in the main were happy to declare had not produced a “winner” and had therefore failed to produce anything of interest.

But there was a winner. It was the audience, who showed a clear preference for progressive ideas that are normally associated with the left. Ideas that are usually casually denigrated by the right for just that reason.

What was on show during the leaders’ debate, in embryonic form, was a conflict between two competing ideas of fiscal management.

The view held by the established parties FF and FG, was firmly rooted in ideas of the past, of a Sean Lemass type of approach to economics that involves obsequiously pleasing multi-nationals who will “give” us jobs, and then later, when the books are balanced and good old-fashioned (not to mention discredited) trickle-down economics begins to do its thing, the poor can be housed in the new houses and bandaged up in the new hospitals. Until then, however, some will have to sleep and die on the street.

A by-product of this approach has been the neglect and often penalising of local indigenous business start-ups and a continued dependence on foreign capital to “help” us. Like as if we suffer from some kind of national learned helplessness. It’s awful, and it’s probably why we became such marks when the bubble burst in 2008. Everyone apparently made money out of us, except us.

This now dated approach to fiscal management involves slow, tedious plodding in a situation where the plodders themselves are never likely to be burned by their own policies.

Leo and his merry men won’t be pitching tents down by the canal any time soon, to wait in vain for the promised fruits of trickle-down.

The other view on show, taken mainly by the left of centre parties, is a recognition of changed times, the very thing the conservatives don’t seem to get, or if they do get it they view the challenges in the same plodding manner of “meeting targets” until everything magically aligns, a process that takes leisurely time for granted, the very thing unavailable at this time, particularly with climate change breathing down everyone’s necks, sometimes in the form of a big wind and floods, sometimes in the form of fire.

Changed times call for fresh ideas across the board, and to their credit, the ramshackle left are at least engaging in progressive ideas that take cognisance of the realities of climate change and late stage capitalism, and all that these twin challenges entail in their impact on jobs and wealth creation and distribution. Not to mention life and the survival of the species. Little things like that.

Though the left know they have to be careful with their “wild” ideas, because the Irish electorate, the older ones especially, are quite conservative.

So, for instance, Eamon Ryan of the Greens couldn’t come right out and say “basic income” for fear of causing a scare, even though all progressives realise by now that basic income is a real policy option to deal with a host of problems like climate change, job creation, crime prevention, trickle-down economics (since the tap was turned off by gush up economics), not to mention the timely prevention of out and out revolution and the possibility of your privileged complacent head ending up in a basket.

But the established parties continue to rely on old ideas way past their sell-by date. Ideas which are actually damaging to society, rather than progressive, not only in the effect of the destructive out-dated policies, but also, and perhaps especially, in the determination at all costs to close down fresh thinking in favour of doing things in the safe “old ways”. The ways that created homelessness and hospital waiting lists.

But the enthusiastic response from the Galway audience to the progressive ideas coming from Richard Boyd Barrett in particular, made it clear that a new, young Ireland is emerging that has a far greater grasp of fiscal realities than Leo Varadkar and Fine Gael would give anyone credit for.

Maybe it’s because the young, robbed of a future by the banks, are familiar with the fiscal realities of having to pay an over-inflated rent from a low-paid job because government policy has been to look after the top tier while everyone else stands in line waiting for trickle-down.

Maybe that’s why all the urgency is at the bottom and all the complacency is gathered like thick cream at the top.

One of the high points of the debate was [Social Democrat co-leader] Rosin Shortall’s revelation that in 2011 she had witnessed Fine Gael ministers deciding to cull a range of community projects, as part of an austerity drive, creating inequality as a by-product, which had the effect, in disadvantaged areas in particular, of creating seed-beds for crime. This from a party who present themselves as champions of law and order.

She went on to say that in 9 years Fine Gael had cut garda services by 40%, again causing negative outcomes in social inequality, while providing opportunities for crime.

In other words, Fine Gael policy, as predicted by economists Joseph E. Stiglitz and others, was causing the inequality that was giving rise to the social problems, including crime, which Fine Gael, architects of the growing social rot, were now talking about addressing as the party of “law and order”.

Given that over 200 homeless people have died over the last 4 years, according to statistics from the Dublin Regional Homeless Executive, and given that Fine Gael policy in particular has often amounted to an attack on community, creating social inequality, as described by Roisin Shortall during the debate, it is surely only a matter of time before the accepted legal distinctions between lies of commission and lies of omission, are also applied to policy-making and their outcomes.

With outcomes resulting in deaths, as in the case of the clash between Fine Gael’s outmoded privatisation ideology and homelessness, these homeless deaths are, arguably, killings by policy omission.

This was a feature of Micheál Martin’s play throughout the debate and something of a characteristic of Fianna Fail down the years, which can be summed up with, if you don’t have a good idea yourself, grab someone else’s good idea and flog away.

Micheál Martin seemed ever watchful for ideas from elsewhere and brazen about immediately appropriating anything which seemed to be playing well with the audience, so long as it wasn’t too outrageously leftie, such as some of the remarks coming from Richard Boyd Barrett.

When Mary Lou McDonald talked about homeless families living in the box-rooms of parents’ houses as a consequence of Fine Gael housing policy, Micheál grabbed that one too and even had the neck to re-present the story, only moments later, word for word, as his own original thought.

This kind of thing, while it might seem cute, only succeeds really in keeping the non-thinker stuck, because they will never think for themselves so long as they believe that stealing ideas is clever. If they happen to be running the country, well then everyone is in trouble.

By the way, there is a cosmic law of creativity that idea stealers never get. The more you give away the more you get.

Stealers think ideas are one-off commodities found elsewhere, and so they always leave themselves idea impoverished, apparently unaware that if they would just stop and think the ideas would arrive, the first law of creativity being, There’s nothing you can do that can’t be done.

Speaking of idea borrowers, Leo Varadkar is interesting in the way he endeavours to cast himself as a visionary of the future, despite his ideas being mainly of the past, even down to the rudimentary idea that anyone who doesn’t agree with his dated right-wing views is “hard-left” and possibly Stalinist in intent who’ll have us all in gulags before you can say “fiscal prudence”.

Again, there can be no room for fresh thinking with this kind of lazy commie bashing that comes direct from the U.S of A., where Leo, incidentally, did his political interning under Republican tutelage.

It’s all just another way of shutting down free thought at a time when fresh ideas are needed urgently. The closing down of ideas under such circimstances is a disservice to the public

The second debate was ultimately a contest of ideas. What was revealed was a total absence of fresh thinking from the government parties, against a sense of urgency and an exploration of fresh ideas from the opposition leaders.

Ideas which were welcomed by an audience clearly more up to speed with the issues at stake than the complacent government parties, whose leaders seem to be going through the motions with the expectation of just breezing back into power in some slightly inconvenient rearrangement of the present Dáil.

It remains to be seen whether or not the Galway audience was a fair reflection of the national electorate. It could be that Galway audiences may be a bit more progressive in the type of crisis creative thinking that is now required.

Life on the West coast of Ireland, due to weather conditions and the rocky terrain, has always offered something of an ongoing climate crisis, often requiring advanced creative thinking to remain balanced under extreme circumstances.