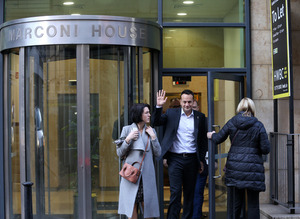 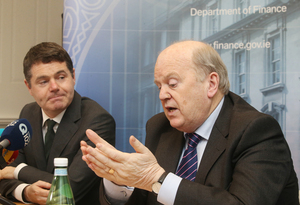 From top Taoiseach Leo Varadkar leaving Marconi House after an interview with Newstalk’s Pat Kenny this morning. Michael Noonan with Paschal Donohoe in 2017

Mr Noonan – who is not running for re-election – told Independent.ie’s Floating Voter podcast that it’s an open secret he wanted Donohoe to replace Enda Kenny.

The intervention comes with Leo Varadkar under pressure as polls ahead of the election show support for the party falling.

The Taoiseach, however, denied that he felt undermined by the intervention – saying Mr Noonan also said on the podcast that Mr Varadkar has been a ‘great Taoiseach’.

The Fine Gael leader said: “I can see how people will try to make a bigger story out of it than it is.

Leo Varadkar allowed to come on Newstalk this morning and bad mouth Sinn Fein, with soft questioning from Pat Kenny.
Nothing about their record on housing, nothing about the disgrace that is our public health service, nothing about about ferociously high rents. An utter joke.

And Then The ATMs Will Stop Working

Set Up To Fail