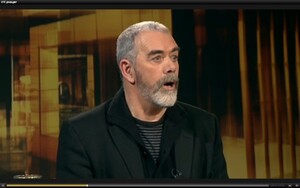 “I think we’re going through a great change. The Irish people have dealt the first decisive blow to the old politics.

And next time out the exact same thing will happen to Fine Gael….

Nothing  has persuaded me that Fianna Fáil, Fine Gael or a great chunk of Labour understands just exactly truly a) how desperate the situation is, b) how powerless the old politics is to deal with it, and c) what’s coming down the line…

…People are going through a strange, slow-motion crash of the state. They’ve dealt with one of the great monoliths.

They’re now scrupulously giving the other monolith in the old politics its shot, and when that proves itself – as it absolutely will, I’m completely certain of this – a busted flush, then the new politics will happen.

So it seems to me this is an interim moment in a long, unfolding process of change…”