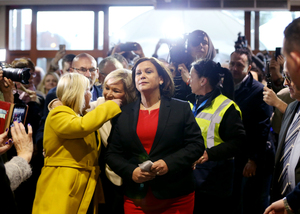 The only thing that can be said about the current situation with Irish politics is that the normal laws of political physics no longer apply.

The fall in support for Fine Gael and Fianna Fáil is part of an ongoing and continuing trend. The speed and depth to which that happens will depend on how each party responds to its current status.

At the start of the campaign Sinn Féin’s strategy would have been to hold on to as many of the Dáil seats it had won in 2016, thus the relatively low number of candidates that were put forward by the party.

We have seen a level of volatility never seen before in an Irish general election. We had been given some indication of this in the presidential election in 2017. Peter Casey rose from an opinion poll rating of 1% to an eventual 23% achieved vote, gained over a seven to ten day period.

That though was a free hit. It gave a means to protest helped with the knowledge that it would not affect the eventual result. The volatility in this general election has been informed by something different. This time a desire for change is as much about a change of approach as it is about a change of personnel.

The issue of housing, particularly for younger and first time voters, has been the issue that has provided the trigger that has informed this desire for change.

Kudos should be given to Eoin Ó Broin as Sinn Féin spokesperson on the issue. He helped win considerable support from the electorate, whose confidence in a strictly market led approach had evidentially evaporated.

So can a government be formed with the arithmetic the electorate has given us? It ain’t going to be easy.

What isn’t likely to work is any kind of confidence and supply arrangement. There can’t be an us and them situation where in opposition you can’t criticise what they do, because it has been enabled by us.

Nor is there likely to be any coalition of the left. This is because there are some on the left who don’t want to be anywhere near government.

This for them is an article of faith. You can’t be the vanguard for a class revolution when you become a mudguard for the establishment.

There could, and may yet be, a Fianna Fáil/Fine Gael coalition that would need the support of up to ten independents. It is not an impossibility.

Eyes may be fluttered towards The Greens and or Labour/Social Democrats to bring about a more stable government. It is hard to see any progressive party agreeing to such an arrangement, with the two traditional parties that have been so roundly rejected by the voters.

The only other possible government would be Fianna Fáil, Sinn Féin with a third and possibly fourth party.

There’s no guarantee that this will happen. There are many factors conspiring against it happening.

Fianna Fáil will continue to struggle with the knowledge that old certainties no longer exist.

To secure government Sinn Féin itself needs to compromise. Its hunger for office means it is likely to engage. Whether others are prepared to compromise will determine whether a new government can come into being or not.