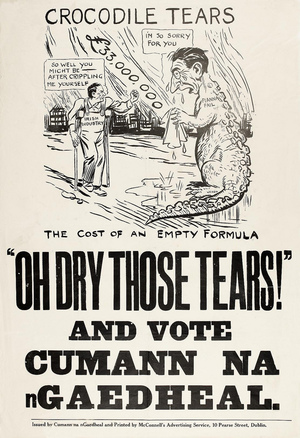 Much in politics is rarely new. What seems novel very often is a variation on a theme. As earthquake seeming as the 2020 election seems, there are parallels with previous elections.

The 1948 general election springs immediately to mind. Then Clann na Poblachta were the surprise packet. Part of the surprise was that party didn’t do as well as expected.

Led by by a former Chief of Staff of the IRA, Sean McBride, the newly formed party had won two of the three preceding by elections, by playing on growing discontent on poorly performing public services being badly delivered by a jaded and too long ensconced government.

However, unlike Sinn Féin in 2020 which ran too few candidates, Clann na Poblachta in 1948 ran far too many. The party finished a distant third to Fianna Fáil and Fine Gael.

Despite this the party went into government at the first time of asking, and would never recover its peak level of electoral support.

In 1989 the Progressive Democrats were contesting a second general election. The party experienced a significant loss of votes and seats in 1989 from what would prove its peak support in 1987.

Fianna Fáil continued to be led by Charlie Haughey, ostensibly the reason why the Progressive Democrats existed.

In the aftermath of the election it was constantly stressed that Haughey and Des O’Malley, the PD leader, could never be in the government with each other. They were.

By the next election in 1992, Haughey’s reign as Fianna Fáil leader would be over. The PDs would have another twenty years of existence, more often in government than not.

It is the June 1927 general election that most reminds me of the current situation.

It was the first election contested by the Fianna Fáil party, then little more than a year in existence. The party had absorbed much of the then Sinn Féin members in its ranks.

Despite dividing from Sinn Féin on whether abstentionism was a tactic or a principle, Fianna Fáil contested the election on an abstentionist platform.

The party won a similar share as Republicans had won in 1923, ending up with 44 TDs.

This put Fianna Fáil quite close to Fine Gael’s predecessor party, Cumann na nGaedheal, which ended up with 47 TDs, thirteen down from the number won in 1923.

Labour had quite a good election electing 22 TDs. A number of other parties also elected significant numbers of TDs, The Farmers’ Party winning eleven seats, the National League electing eight.

The League was also a new party, but was actually a hangover from the old Irish Parliamentary Party at Westminster.

Rump Sinn Féin won five seats, none of which would ever be sat on. That version of the party would not take part in Irish elections for a further 30 years.

Fianna Fáil’s abstentionism would soon be tested. One of its TDs, Paddy Belton (soon to sire a Fine Gael dynasty) went on a solo run taking the dreaded oath and his seat in Dáil Éireann.

For his troubles he would be immediately expelled from Fianna Fáil. However he would soon be followed in the Dáil chamber by high profile War of Independence figure, Dan Breen.

After that the jig was up. Fianna Fáil declared that the oath of allegiance was but an empty formula, then entering the Dáil chamber. Such formulations are likely to be referred to many times as we seek to address our current situation.

Once in the Dáil the ability of the minority Cumann na nGaedheal government to continue was threatened.

Discussions took place, and the possibility existed that a Labour/National League government (supported by Fianna Fáil) could be formed.

Cumann na nGaedheal survived after a National League TD, the unfortunately named John Jinks, failed to appear for the vote of confidence.

Legend has it that he was being plied with alcohol at the time. The more likely reason was that he was uncomfortable about being in government with Labour.

C na G leader, William Cosgrave, called a new election held in September 1927. This saw Cumann na nGaedheal and Fianna Fáil solidify their positions, at the expense of all the other political groupings.

Lessons from this? Change when it happens needs to be responded to quickly. If not it can just as quickly fade away.