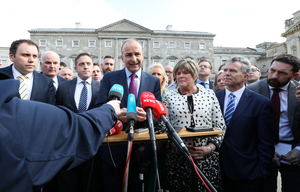 From top: Fianna Fáil leader Micheál Martin (centre) and party colleagues on the first day back at the Dáil following the General Election; Derek Mooney

Though I can understand why so many carp on social media about the government formation process moving too slow and taking so long, the real problem is that it isn’t taking long enough.

Parties… and I am primarily talking about Fianna Fáil here… have rushed headlong into the process without stopping to take in precisely what happened on February 8.

It is not that Micheál Martin, or his centralised team of advisers, haven’t grasped that they didn’t win – or even do as well as they had expected – but that they have not absorbed what the voters told them.

That message, as I said on here on the Monday after polling, was clear enough.

Voters rejected the proposals put forward by Fianna Fáil. Not as resoundingly as they rebuffed Fine Gael’s, but they spurned them all the same. Voters saw Fianna Fáil’s package of cautious change and declined it in favour of more radical options.

“The harsh reality of yesterday’s result is that Fianna Fáil has just secured its second worse electoral result ever. That is not the type of result from which you pivot into office and carry on as if the voters have not spoken.”

Yet, on the face of it, this is precisely what Martin is doing.

Rather than stopping to take a hard look at why his party lost support and seats, he is rushing into talks to establish a government of Fianna Fáil, Fine Gael, the Greens and various independents based on the very manifesto that secured fewer votes for the party than it won in 2016 (down from 24.3% to 22.2%).

Not only is he not stopping to consider why voters turned away from his party he is compounding the error by not addressing the concerns of the many voters who looked to Fianna Fáil for radical solutions on housing, health, homelessness and rental accommodation – and found nothing.

Where Mary Lou McDonald has been out and about talking to voters, albeit in carefully managed events, the impression is given by his own behaviour since February 9 that Martin is in hiding. Where he does appear, he is surrounded by loyal lieutenants, not ordinary people.

These optics are important, not least if the process of putting a government together fails and we do end up with another election.

Yesterday’s Sunday Times/B&A poll gives a hint of how that second election may turn out. I say hint as the poll assumes the parties will simply re-run the February election with the same campaigns, the same policy platforms and even the same leaders?

Some around Martin are saying that yesterday’s poll is proof that the leadership is on the right track in seeking a government with Fine Gael et al because a second election could mean Fianna Fáil annihilation.

This is one interpretation of the poll numbers. It is one that curiously aligns with the individual interests of some at the top.

There is another interpretation. It says the Sunday Times/B&A poll numbers prove that Fianna Fáil’s strategy is failing. That is wrong not to directly address voters and that it is making that mistake worse by asserting the mandate it received is enough to continue along the current path.

Perhaps the problem is that any proper examination of why Fianna Fáil did badly must focus on those close to the top of the party. The difficulties with Fianna Fáil’s #GE2020 campaign were not at the grassroots or constituency level.

As a well-seasoned observer of election campaigns I found the Fianna Fáil ground campaigns mounted across most constituencies (admittedly not all) were the equal of any I have seen pre 2008.

To use a crude metaphor, if #GE2020 were the D-Day landings then Fianna Fáil’s attack troops were among the best assembled. They stormed the beaches at the start of the campaign with ferocity and vigour, only to find their high command back at the bunker had neglected to put any meaningful air cover in place.

So, having set out why I think what Martin is doing is wrong, do I have any suggestions as to what they should be doing? The answer is yes, and this is not a case of me being wise after the event.

A few hours after submitting my February 10 Broadsheet piece I typed up my thoughts on how Fianna Fáil should approach the issue of government formation and shared it with some party colleagues.

I attempted to draft core principles that should underpin Fianna Fáil’s approach. This is what I wrote:

I think we need to make clear that:

A. We hear and understand what voters are saying

B. Our views on Sinn Féin have not changed

C. We put the people first

D. We will be driven by policies not partisanship

The principles on which Fianna Fails approaches government formation.

1. Fianna Fáil has not changed its long-standing view on Sinn Féin, its associations, its structures or the paucity of its policies.

2. Fianna Fáil recognises that the agenda for change which we put forward was not accepted by the voters and they have signalled through their support for Sinn Féin, the Greens and others that the changes they want delivered on health and housing are profound.

3. The support shown for the Green party is also a clear message that voters want more action on climate change than was contained in the Fianna Fáil manifesto.

4. Fianna Fáil hears very clearly that voters want more action on housing health and climate change, and we recognise that policies to promote these changes must be enacted now. Fianna Fáil will do what is necessary to facilitate these changes within the limits of our issues as set out in point 1.

5. Options including the formation of a two-year national unity government of Fianna Fáil, Fine Gael Sinn Fein, and the Green party merit active discussion and consideration.

7. While we would have considerable policy difficulties with a left wing alliance of SF/Greens/Labour/SocDems/S-PBP and others, we would be willing to see the degree to which we could support any specific actions on housing, rental accommodation and health that such an alliance could produce.

Fianna Fáil will approach all discussions with all other parties on the formation of a government in the 33rd Dáil on the basis of these 7 principles.

I wrote these seven principles three weeks ago. They were intended to encourage a discussion within Fianna Fáil on how it responded meaningfully to the election result and played the hand it had been dealt.

It is still not too late for Fianna Fáil to pause, reflect and think again about what the voters said on Feb 8 and show them that they heard them loud and clear – doing that is a far better way of preparing for a second election than pre-booking printers and ordering corriboard.