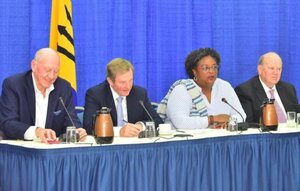 Former Taoiseach Enda Kenny declared seven trips abroad. This included trips to Germany, Portugal, Barbados, UK, and three to the U.S. The one to Barbados was to discuss Ireland’s “economic recovery” with the government there: pic.twitter.com/WODXRu5rEZ

The former finance minister Michael Noonan also travelled on that trip to Barbados according to the register: pic.twitter.com/w3Yvos7AcH

There were a couple of new properties registered. Former minister and now MEP Frances Fitzgerald declared part-ownership of a rental property in Clare while Housing Minister Eoghan Murphy registered a property in Irishtown, Dublin: pic.twitter.com/faLV0yqm1D

If there was a prize for longest entry in the register of interests, then Fianna Fáil’s Seán Haughey would definitely be the winner: pic.twitter.com/Mg5CtHi239

What? No Viking Hats?