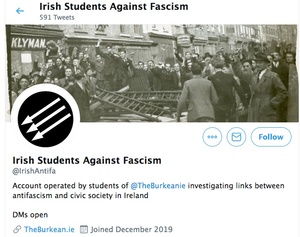 Via The Burkean (funded and run by conservative-leaning undergraduates):

it described itself as an aspiring antifascist organising hub to physically, socially and professionally harass individuals engaged with conservative or nationalist politics on campuses.

….What has been unknown until today was that, from the very onset, the page was operated by students involved with The Burkean.

The account was set up with the intent of performing long term investigative work into antifascism in Ireland, as well as its insidious and often blatant links with civic society, journalism and politics.

…Over the coming weeks, The Burkean will be publishing a series of exclusive messages, audio and video recordings that give a hint of the sheer scale of this corruption.

These materials will show how students and organizations deemed to be politically dissentious had their data gathered and distributed amongst a host of campus activists, violent and non-violent, all with the support student government.

This project will demonstrate how major student institutions treat those they perceive as politically dissident, as well as the degree to which they abuse their positions of power.

Organisations such as Young Fine Gael were specifically targeted, with senior members of student organisations expressing a desire to help for private meetings to be infiltrated and members doxxed.

From members of the Oireachtas to street activists, to an assortment of foreign financed NGOs and political activists ranging from Ógra Fianna Fáil to People Before Profit, the scale of the blatant corruption is remarkable.

A spotlight shall be shown not merely on a rotten system of partisan corruption, but also on how power relations operate in Ireland against those deemed a threat to established power…

Ireland is ideologically colonised by a meshing of a big money ‘eurocommunism’ & Silicon Valley Clintonism. We’re a crypto-police state with cosmetic democratic trappings that soft purges dissidents from the institutions. And this is how that corruption is undertaken. https://t.co/zNHR4H4VTv

84 thoughts on “Sting Has Sprung”