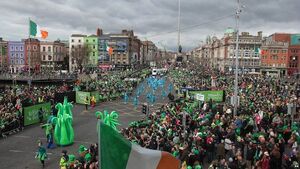 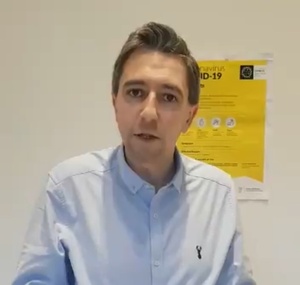 It follows reports yesterday that 1.9million people in Ireland, or 40 per cent of the population, are ‘likely’ to become sick with the virus.

As of this morning, there have been 21 confirmed cases in the Republic of Ireland.

The interview also came ahead of a Cabinet sub-committee on Covid-19 meeting later today.

Among matters they discussed included how people forced to stop working will cope financially, the number of Intensive Care Unit beds in the country and St Patrick’s Day festivities.

Mr Harris also told Dr Jennings that there is “a moderate to high risk” that Ireland “will follow a pattern seen in other European countries”.

Gavin Jennings: “Have you made a decision on paying people who have to stay at home. If people are going to be asked to self-isolate for 14 days to help contain the virus, how are they going to do that with no income? Are they going to get sick pay? Or are you going to give them statutory pay?”

Simon Harris: “So, at the moment, as you know. If you’re out sick, or told to stay at home, you can access social protection supports. The challenge is you can’t access them for a number of days.

“One of the things we’ve been looking at across Government is can you reduce that waiting period so people can get support more quickly. And that’s something we’ll be considering today.

“The best way of doing it is something…”

Jennings: “Sorry, have you made a decision yet?”

“The only thing we’re trying to…we’re very clear on what we want to do here. And we want to provide the support. The only question that remains is how best do we do that and we’ll consider that this morning.”

Jennings: “At the moment, all confirmed cases are being treated in isolation in hospital. How much longer is that going to be the case?”

Harris: “So that is a clinical call that will be made by the public health emergency team. And let me just explain why that is. One of the reasons we’ve been asking people who have tested positive and have the illness, even if they’re reasonably well in themselves.

“One of the reasons they’ve been staying in hospital, rather than self-isolating at home is, remember this is a very, very new virus. And it’s providing an opportunity for our healthcare professionals to continue to monitor and learn more about it. And that information will stand us in good stead.

“But you are quite correct. You will get to a point in time where it will not make sense for people who have tested positive, but are reasonably well, to take up a bed when there could be somebody who’s positive and not well, who requires that bed. So we have a protocol in place to enable people who test positive to self isolate at home and our public health emergency team will decide when to make that switchover.”

Jennings: “What are you going to do when there are more critically ill people than there are ICU beds? What’s the plan?”

Harris: “So there’s a couple of elements to this plan. The first, as you know, is we’re expanding ICU capacity and we gave another €21million to the health service last week to open more ICU beds….”

Harris: “That’s about right. They’re continuing to look at opportunities across the health service to open more beds and those beds will be funded. We’re also going to engage our private hospitals, it’s quite likely that if you got to a situation where this virus outbreaks in a serious way, that many elected procedures in private hospitals could yet be cancelled. So they may have capacity. So we’re looking at that as well.”

“We’re also looking at one of the other ways you can increase capacity, is obviously increasing the workforce. So lifting any kind of restrictions on recruitment. Up until now obviously all recruitment, you’ve only been able to recruit funded posts. That’s the norm. But making it more flexible to recruit more people, bringing back from experts, and also looking at the possibility of our model two hospitals, they’re our smaller hospitals, Gavin, having capacity to do more in relation to isolation.

“But indeed there’s a global shortage and this is a challenge that we’re seeing, health services are seeing it in Italy today. So everything that can be done is being done.”

Jennings: “Italy had 20 confirmed cases on February 21, now it’s almost 16,000. And they have 16million in lockdown. We have 21 confirmed cases and everything is going ahead as normal. Why aren’t we trying to get ahead of this disease?”

Harris: “So we really are. And I wouldn’t accept that everything is going ahead as normal. We had our first confirmed case of this last weekend and since then you’ve seen the benefit of the work that’s been done since January with the number of key decisions made. We’ve shown a willingness to cancel events, as is appropriate. There were a number of rugby games due to take place in this country over the weekend that didn’t on the basis of public health advice.

“We’ve set up a stakeholders forum to bring together all of civic society, unions, employers, voluntary groups and that’s met twice. There’s a new Cabinet committee convened. We’ve changed our protocols so the national ambulance service is now doing a really good job, going out and doing testing in people’s homes. Saves them having to come into the hospital. We have information and experts available in all of our airports providing information and we’ve expanded our ICU beds.

“And we will do more. But it is important to say, I mean Ireland is at at early stage of progression here compared to other European countries. You referenced Italy but look also at France, at Germany, the UK. But you’re right. There’s a moderate to high risk, we can’t sugarcoat this. There’s a moderate to high risk that we will follow a pattern seen in other European countries and that’s what we’re preparing for and what we’re working around the clock for.”

Jennings: “France is cancelling public gatherings of over 1,000 people. Germany is considering doing the same. Is it responsible to allow St Patrick’s Day festival and gatherings to go ahead now?”

“But whatever our public health experts guide us on in terms of St Patrick’s Day is what the Government will go with. The chief medical officer and others are providing us with expert advice, round-the-clock, in what is a fast, evolving situation. This is changing not just in Ireland but around the world on a very regular basis and we’ll meet again this morning just after 11am and we’ll have a chance to assess this.”

16 million Italians quarantined but they can still get a flight to Dublin!! Can some explain to me WHY there are still flights coming into Ireland from Northern Italy?? Is lockdown not lockdown?? Public health is top priority now🚨 #COVID19ireland #COVID19 #coronvirusireland pic.twitter.com/cKlItn8d7W