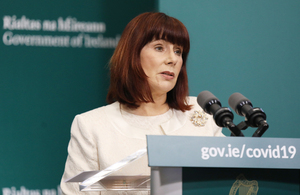 Minister for Culture, Heritage and the Gaeltacht Josepha Madigan at a press conference in Government Buildings earlier today

Ms Wilson asked the Fine Gael TD about the “shame on you” comment she made in the Dáil yesterday, and her refusal to respond to any concerns raised by TDs – including a concern about 79 people testing positive for coronavirus in one nursing home.

Ms Madigan, who was opposed to yesterday’s Dáil sitting because of social distancing protocols, attended a press conference this afternoon in Government Buildings to announce a string of artistic initiatives.

Ms Wilson asked her what was the difference between attending Leinster House yesterday and the press conference today. She said there was a “big difference” between them.

They had this exchange.

Mary Wilson: “You had no problem, minister, straying from home today to come and announce your support for the arts community. Yesterday it was about not straying…”

Josepha Madigan: “There’s a very big difference. There were only four of us there today, all of us coming in from Dublin. Everybody in the Dáil comes, as you know, we represent the entire country. It’s something that I really think, if we’re trying to give the message of the public health guidelines asking people to wash their hands, asking people to social distance, asking people to follow all those guidelines like, you know, using good cough and sneeze etiquette and all of these things.

Wilson: “The questions were legitimate weren’t they, minister?”

Madigan: “And all questions should be answered. Yes, I do think that. And Minister Harris took a note of all their concerns and he will be coming back, as I said, to Deputy [Stephen] Donnelly yesterday with that in relation to it.”

Earlier: A Refusal To Hold Themselves Accountable [Updated]

‘I’ll Be Going Into Conversations With A Very Open Mind’