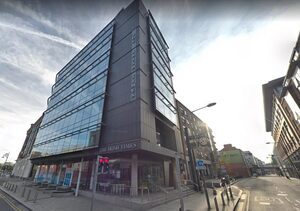 Offices of The Irish Times on Tara Street, Dublin 2

The Irish Times is reporting online that it has announced a three-month pay cut of up to 30 per cent for higher-paid managers and editors.

Other salaries will be maintained with the support of the Government subsidy scheme, the company told staff on Thursday.

Reduced working hours may be required in some cases, and a recruitment freeze has been introduced across the organisation.

The company will also target a range of non-payroll costs.

Irish Times cuts senior manager and editor pay by up to 30% (Laura Slattery, The Irish Times)

Our readers’ appeal on @thejournal_ie is now live.

The message? Our aim over the past decade has been to provide open access to valuable journalism.

Never has that been more important. But it’s also never been more difficult. https://t.co/1F36qyYHZi

12 thoughts on “Hitting A Pay Wall”