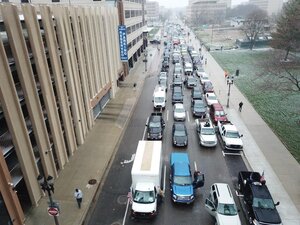 A loud protest in front of the State Capitol in Lansing- many not happy with @GovWhitmer and her Executive Orders. @WWJ950 @FOX2News pic.twitter.com/xuv2Ab4oU4

The protest was organized by the Michigan Conservative Coalition, who says Gov. Whitmer’s strategy for keeping Michigan residents safe is costing those same residents money in the process.

Meshawn Maddock, a spokesperson for the group, says there has been no action from Gov. Whitmer to promote both physical and economic health while the stay-at-home order is in effect.

“There is no reason why she can’t be looking at some safe ways to be opening up businesses. Instead of talking about what’s essential and nonessential, let’s talk about what’s safe and not safe,” Maddock said. “Safe businesses and safe workers need to get back to work.”