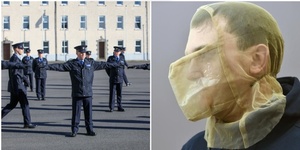 The Policing Authority published an interim report on policing performance during the COVID19 crisis.

The attestation of recruits, who had not yet completed their training and their deployment to assist in the current crisis is a matter of concern for the Authority, while the Commissioner’s reasons for doing so are well understood. .

There was a similar welcome for the Commissioner’s confirmation that the
trainees are assigned as ‘assisting members’ with limited powers in their own right,

While recognising the harm that may be caused to members of the Garda Síochána and members of the public by spitting, given the highly contagious nature of COVID-19, it is with some considerable reluctance that the Authority views the introduction of this new device.

The Authority has specifically requested a number of clarifications from the Commissioner on their use. For example, concerns arise that while the procedure stated that the use of anti-spit hoods is not permitted on children under 12 years of age, it is silent on their use on children aged 12 and over.

It is the Authority’s clear view that the document should make explicit provision in respect of the circumstances that would warrant their use on children, or categories of children, within the group aged between 12 and 18…

10 thoughts on “Spit And Polish”