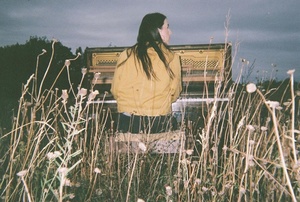 Sorcha is in a field of her own for the new video from her Choice Prize-nominated debut album First Prize Bravery.

“The video for Honey was shot and directed by my friend Ross Andrew Stewart. We made it, kind of on a whim, on one of Ross’s last days in Dublin before he was going back to New York, some time before the current crisis kicked off, when you could still buy a piano on adverts for €50 and drag it through a field with your friends.

That piano now lives at my rehearsal space, and is far more out of tune than when we picked it up that morning, with a couple souvenir blades of grass still stuck in the wheels.”

Sorcha plays an empty Whelan’s next Tuesday as part of the Other Voices ‘Courage’ series of online gigs streaming via Facebook, YouTube and RTE.ie.

Nick says: The grass is singing.