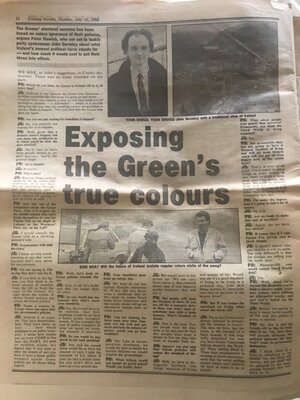 My friend and colleague, John Gormley, posted an image on social media recently. It was of an interview he had given in 1990. The tone of the article was downright condescending.

Within seven years of this article John would have become a city councillor, Lord Mayor of Dublin and eventually a Teachta Dála.

The interviewer and author of this article wrote with the intent that neither John Gormley, nor anyone like him, should ever be elected to anything.

The questioning was never meant to be anything but rhetorical. Any alternative vision which challenged the status quo could only be treated with derision.

The Real World has been the callow phrase used by commentators, now as much as then, to denote that those who saw change as being necessary as being fools.

Over the years I have been subject to many of these interviews myself, as have dozens of other Green public representatives. The initial reaction to these constantly hostile interrogations would be to become angry. Eventually we could settle at laughing internally at our interrogators.

We can’t afford to do that, was another predictable phrase we would hear. Much of the time it was worthless to make arguments, knowing they weren’t being listened to.

Still it has been depressing to realise that the Irish media continues to be permeated with journalists who make no attempt at all to understand, choosing instead to undermine from the onset.

This is different from the necessity to criticise and to be criticised. There are many criticisms of The Greens that are justified and necessary.

Often naive sometimes impatient. Much of the time less sure of foot of the means to define our messages or communicate the same.

One thing I believe The Greens are not is impractical.

The now near forty years of being treated as a sub species by the Irish political establishment has hardened the Green Party, but sadly little realism seems to have seeped into the thinking (such as it ever was) of other political parties.

Now, once again, the Green Party is seen as needed if not necessary. It is our numbers that are required, not our policies and certainly not our values.

There have been several commentators who, since the general election, have been berating The Greens for not fulfilling our bestowed duty to serve willingly and unquestionably in the next government.

Once The Greens made known what our priorities would be were we to be part of a government, it seemed something of a revelation to some of these commentators.

The idea that having The Greens in government meant implementing different policies, doesn’t seem to have been part of their equations.

One columnist (part of the same newspaper group that conducted the 1990 interview with John Gormley) took to social media. She asked, without any sense of irony, whether the 7% (average annual reduction of carbon emissions) was “doable?”.

This was an interesting approach to the information cycle. Demand a party be in government. Express surprise at what their policy priorities are. Realise that their presence would produce a different kind of government altogether.

Whether The Greens become part of the next government or not, will depend on whether talks take place that produce a draft programme of government, which gets approved by the Green Party’s membership.

The logic of that sequencing still seems beyond some of our political commentators. They probably can’t afford to understand.