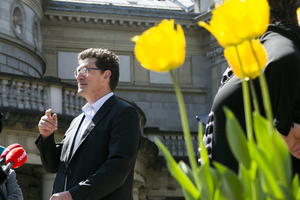 The Green Party is currently debating whether to enter government with Fianna Fáil and Fine Gael. There are legitimate arguments on all sides of this question.

However, before making a decision I would strongly advise the Greens to read the fine print; in particular, the fine print of the Stability Programme Update (SPU) – the Government’s latest economic and fiscal projections.

Of particular interest are the fiscal projections, the Government’s estimate of public spending in 2021. This is a baseline, a product of layering the Medium Term Fiscal Strategy on to the Budget 2020 projections and then adding the impact of the crisis (falling tax revenue, rising unemployment and healthcare costs, etc.).

This baseline reveals the challenge for the Greens and their programme – a programme which emphasises investment to address climate chaos, a new social contract, the housing shortage and other elements of their 17 demands.

Let’s compare the SPU projections with those contained in Budget 2020 (the latter was put together last autumn). This comparison is useful because it shows the leeway the Government is now giving to the radically altered post-coronavirus economy. The problem is the Government is not giving much leeway.

In 2020, spending will greatly exceed the Budget 2020 projections – by €5 billion. This is driven by increases in social payments (unemployment payments, wage subsidy scheme) and healthcare expenditure. However, in 2021 the SPU pulls public spending back to the Budget projections. 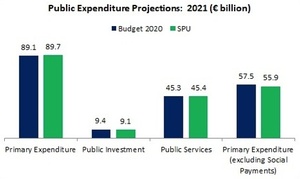 Overall public spending (primary expenditure excludes interest payments) and spending on public services are being pulled back to pre-coronavirus projections. In fact, when we exclude social payments, public spending under the SPU actually falls below that projected in the budget last year.

The real question is: how are people’s demands for enhanced public services, especially a single-tier health service, going to be met using pre-crisis budget projections? What about the enhanced income supports? Or a renewed public housing programme?

What about the multi-billion Euro stimulus programme for business that will be needed? Now, add in a significant Green New Deal investment programme. All that on the basis of spending projections presented prior to the current crisis.

Then there’s the orthodox mood music. The Minister for Finance stated in the Dail recently:

‘Our deficit will have to be reduced, our national finances must return to a position of balance again.’

Why? Why must we ‘return’ to a position of balance? Even the Fiscal Rules, as orthodox a set of rules you’ll find anywhere, allow for deficits.

The rationale for a deficit-spending strategy is set out here. Any attempt to pursue a balanced-budget strategy in the medium term will unnecessarily restrict social, environmental and economic investment.

Sebastian Barnes, the acting chair of the Irish Fiscal Advisory Council, writes in the Irish Times:

‘Compared with the 2008 crisis, it should be possible to avoid severe austerity.’

‘There will likely need to be fiscal adjustment to make up for any permanent shortfall of tax revenues . . . but there should also be some space to support demand . . . public investment should be a key part of a new national economic plan . . . Despite the difficult background, universal healthcare, better housing and addressing climate change are all still achievable.

However, these goals require substantial resources to succeed . . . This will require hard political choices about how to fund these policies . . . Spending will have to be reprioritised between programmes or become more efficient, or the tax burden will need to increase. Someone will need to pay.’

This carefully crafted op-ed has something for everyone: ‘fiscal adjustments’ (in the last crisis this was code for spending cuts); ‘public investment’; achievable social and environmental goals; ‘hard political choices’; ‘reprioritised’ spending, ‘increased’ tax – ending with the ‘someone will need to pay’.

Nothing in the above is wrong or misleading. But it shows how amorphous the debate can be – until, that is, we get to the fiscally programmatic.

The word ‘austerity’ will be avoided. However, that doesn’t mean it won’t feature in other forms. The SPU projections mirror the projections in the last budget. And those showed how misleading headline numbers can be.

For example, Budget 2020 projections for public service spending (government consumption) up to 2024: 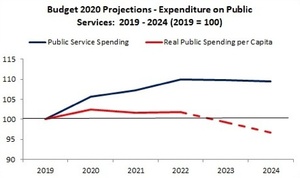 Public service expenditure rises by nearly 10 percent between 2019 and 2024. That’s the headline number. However, when we factor in inflation and population growth it falls by over three percent.

This can be called austerity below the radar – using inflation to squeeze spending. That the Government returned to the 2021 level of public service spending in their SPU should warn us about future trends in the post-crisis environment.

The Green Party will have to make an assessment based on this fine print, below-the-radar reading.

Do they believe that the two larger parties are willing to engage in fiscal expansion over the medium term to fund social, environmental and economic investment?

Will there be enough money to fund Slaintecare, improved income supports and a Green New Deal?

And if not, how do the two parties intend to fund these? Or do they intend to? Will the two parties hide behind possibilities and eventualities, headline numbers and selective application of the Fiscal Rules?

There is an alternative. The Fianna Fail-Fine Gael document states:

‘We also recognise the need for a strong Opposition to hold the Government to account – one that can contribute, critique, challenge, and change policies.’

A strong opposition could wield significant influence, contributing to and changing policy. And a strong opposition is the first step towards an alternative government. If the two larger parties are reliant on independents, an early election becomes more likelY

And in that alternative government made up of progressive parties, the Greens would be far better placed to ensure that their programme is implemented. If they are still unsure, then they should read the fine print.

The Robots Are Coming

Michael Taft: Give Everyone €75 A Week