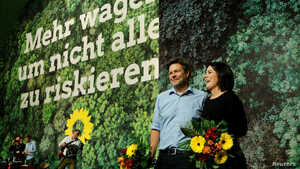 In these trying times social media offers some forms of amusement, as well as many sources of frustration.

A friend on Twitter daily posts stills from classic films he is watching to get him through COVID. He challenges others to identify the film.

I quickly identified The Third Man (1949) as one of the films. I just as quickly let myself down when I identified Berlin as its locale, rather than the more obvious Vienna. I was tired.

Another excuse I would have proffered would be that I have been thinking a lot about Berlin and Vienna in recent times. More particularly about the fortunes of the respective Green parties in the countries of those capital cities.

In Germany, Die Grünen have been the template for the development of green politics throughout the world. There have been peaks and deep troughs in its political development.

At the time of German reunification the party lost all of its Bundestag seats in West Germany. It was thought that the party was not sufficiently identifying with the national mood. Although it was proven right about the economic cost of Helmut Kohl’s Ostmark policy.

Its parliamentary presence was barely maintained through a once off quirk in the German electoral system. This saw its newly acquired East German allies Bündis 90 winning a handful seats. The irony here is that, even thirty years later, East Germany is the part of the country where Green support is weakest.

Eight years later The Greens would not only have a restored presence in the Bundestag, it would be a party of government for the first time. A minority partner to the Social Democrats. It seemed a good fit.

It wasn’t without difficulties. It did manage to get re-elected though. Since 2005 it has been all about Angela Merkel.

Where The Greens in Germany have successfully become embedded is in State (Länder) government. There are sixteen such state governments. In 2020 The Greens find themselves a government party in eleven of these.

It coalesces with every political party in the State, with the exception of the Christian Social Union in Bavaria, or the Alternative für Deutschland anywhere.

In one Länder, Baden-Württemberg, The Greens are the main party of government with the Christian Democrats the minority party.

Up until twelve months ago, The Greens seemed on course to become the most popular party in Germany. Since then Angela Merkel has had a significant COVID bounce. Her party, the Christian Democrats, has seen its support increase by over 50%.

Green support has slipped by 10% and is now on a par with that of the Social Democrats. With the impending German general election it seems it will be the choice of the Christian Democrats to decide which party with whom it should be in government.

Up until now the Austrian Greens have not been in government. In 2017 it contrived to almost put itself out of business. A bitter internal feud saw the party lose all its parliamentary seats.

By 2019 it had recovered and reentered parliament. Since January of this year it has been in government with the ÖVP the People’s Party, European allies of Fine Gael and Angela Merkel’s Christian Democrats.

The Greens replace, as a junior partner in government, the notorious far right Freedom Party. Since the election Green Party support there has increased. Support for the Freedom Party has nosedived.

Irish politics has become Europeanised. Government formation also needs to be seen in the same context. The quality that is most needed is not so much compatability (although that remains important) but of fluidity.

Being able to respond to circumstances as they are, not as you would prefer they ought to be, is what should inform negotiations, even with those who are not preferred.

In the meantime I’ll try not to mix up Berlin and Vienna again.