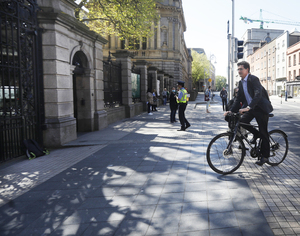 A poem ‘dedicated is to all those in the Irish Green Party who think coalition with Micheál Martin might be just the thing to ward off the global apocalypse’.

Common Sense Climbed Out of the TV the Other Night

And sat beside me on the settee,
its shirt white, its manner mild
as an unsugared cornflake.

Confident as a New York Times Op-Ed
written by God.

Thought provoking in conversation
as a dinner party at which
the main course always tastes
suspiciously like Melvyn Bragg.

I could see from its resumé
it was well thought of by those that matter
like a Hampstead charity shop
in which Joan Bakewell
is now available free of charge.

Though it kept trying
to avoid catching my eye,
when it did, the shiver I got
told me it would be supportive,
when the going got hot,
as a crutch made of butter.

Later, it climbed into my computer
where its tweets against the turning world
looked like they’d been typed in the day room
of a care home for former provosts
of Queen’s College Oxford.

It expressed itself with such authority
I had to test its advice by taking it.
And it turned out to be as sensible
as running through a forest fire
in a grass skirt.

8 thoughts on “Common Sense On Wheels”