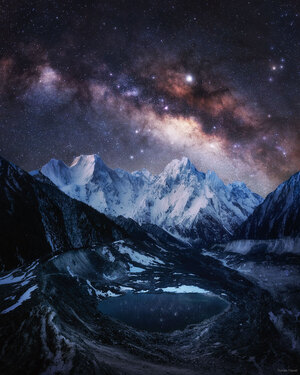 A spectacular view of the tallest mountains on Earth, topped by the Milky Way. To wit:

Visible above the snow-capped mountains in the featured image is the arcing central band of our home galaxy. The bright spot just above the central plane is the planet Jupiter, while the brightest orange spot on the upper right is the star Antares. The astrophotographer braved below-zero temperatures at nearly 4,000-meters altitude to take the photographs that compose this image. The featured picture is a composite of eight exposures taken with same camera and from the same location over three hours, just after sunset, in 2019 April, from near Bimtang Lake in Nepal. Over much of planet Earth, the planets Mercury (faint) and Venus (bright) will be visible this week after sunset.