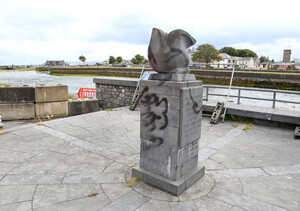 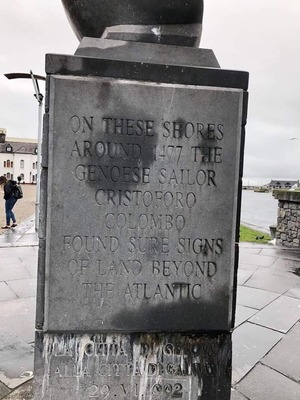 Galway’s Christopher Columbus monument in Spanish Arch was recently vandalised (top). Gifted by the Italian city of Genoa, People Before Profit said it ‘glorified slavery and racism’ and have demanded its removal

How to Get Rid of Christopher Columbus

Don’t get photographed presenting your
two thousand names to the Mayor,
looking as if you’re graduating
with a qualification you’ll never use.
Don’t ask the Church of Ireland or National Council
for the Advancement of Concerned People
to intervene.

Do it yourself.
But not explosives, no.
There’s always a mostly innocent
retired car park attendant with a limp
(or some such) passing at the exact moment.
He retired five years ago
but because of the limp
was still on his way home.
And now he’s in small pieces
or, even worse,
one piece;
and you’re the reason
he has that stutter
when the journalist talks to him
on the every o’clock news.

Nothing like a spot of terrorism
gone amiss
to make all that racism, pillage, and slicing
off most of a native’s thigh
just to test your blades
or a child’s hand
because their parents wouldn’t cooperate
with what was
an honest attempt to improve them
seem civilised in comparison.

Arm yourself with
no mere plinkety chisel
but mallet, kango hammer,
a couple of the like-minded,
and high vis jackets marked
‘City Council’ or ‘Irish Water’
and present the slow citizenry
with the fact
of his stone tribute
in the sea

25 thoughts on “The Columbus Dispatch”