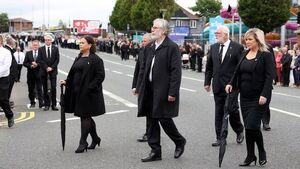 “No family’s grief is more important than another’s.

I am particularly concerned that grieving families who have lost a loved one during the pandemic had their heartache compounded by the necessary restrictions which were in place at that time.

Not being able to have their family and friends’ support to help them through was hugely difficult.

I am also concerned that those grieving families are experiencing more hurt over recent days. I am sorry for that.” 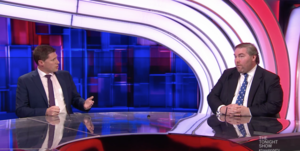 On Today with Sarah McInerney‘s The Gathering slot, the guests were discussing Northern Ireland’s Deputy First Minister Michelle O’Neill’s attendance at the funeral of IRA veteran Bobby Storey in Belfast

Ms O’Neill had earlier issued a statement to say sorry for any hurt caused by her attendance.

Sarah McInerney: “…there have been large funerals. I saw [Sinn Féin TD] Matt Carthy, for example, on the Tonight show talking about Garda Horkan’s funeral.”

Jennifer Carroll MacNeill: “The funeral of a serving guard killed in the line of duty?”

McInerney: “He was raising that as an issue, as a comparison, yes.”

Carroll MacNeill: “Yes, and the Minister for Justice attended that and that was, and but the Taoiseach didn’t attend it and the President didn’t attend it. And that’s a massive state funeral and one of the most tragic and serious things that can happen in this state. And you saw the outpouring from people all across the country, marking it in their own private ways, socially distanced Garda stations all around the country, a moment’s silence. Not even the Taoiseach, not even the president at those very unique moments where there’s a state funeral of that kind attended because it wasn’t appropriate to do so.

McInerney: “I want to bring the others in on this. But I don’t know, do you want to respond to that Martin?”

Martin Kenny: “Look, I mean, I understand there are people who are grieving and people who have been hurt through the pandemic and I understand how they are, you know, somewhat annoyed in regard to that. But there’s also a very political element to this. Our political opponents are jumping on this and indeed, you know, Dublin unionists and Fine Gael are all over this and have been for the past week and we’re used to that and we will deal with it.”

Carroll MacNeill: “But if you want to engage in that way then you are…”

Kenny: “More people in this country voted for us than voted for your party and they believe it.”

At the outset, Mr Carthy criticised Fine Gael and the DUP for attempting to score “political points”.

Matt Carthy: “There have been lots of gatherings at funerals, some of which social distancing wouldn’t have been as robust as you would have liked. And I’ve seen some people using those in response to attacks by Fine Gael and others in relation to Bobby Storey’s funeral. I would ask them to stop because I think it’s really unfair on the families concerned. I think it’s actually really, really lousy…as people, you know, politics, fair game. We’re, as a party, are used to getting attacked for all sorts of reasons but to actually use someone’s funeral…”

Ward: “Leo Varadkar didn’t even attend the funeral of Detective Horkan in Castlerea…”

Ward: “Yeah, the Minister for Justice appropriately did. But normally, at a State funeral, the Taoiseach would go and he stepped back…rather than taking the media opportunity that Mary Lou and those did….”

Listen back to Today with Sarah McInerney here

Watch back the Tonight show in full here

‘I Have Been Significantly Censored In My Engagements With The Media’

Our Saturday Will Come

38 thoughts on “Walking It Back”