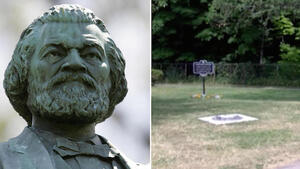 Frederic Douglass spent four months in Ireland at the end of 1845 that proved to be, in his own words, ‘transformative.

The monument to Douglass (above), one of several in Rochester, New York, was found ripped from its base and disposed in a gorge over the weekend. Countless statues have fallen in recent weeks, but unlike Douglass’s, they were all of men on the opposite side of history.

The Rochester police said they had not found anything to confirm or debunk a link to “anarchists,”

…The police also do not have enough evidence to affirm or negate an alternate theory proposed by some people, including Cornell William Brooks, a former president of the N.A.A.C.P.: that the vandalism had been carried out by white supremacists seeking vengeance for destructive acts against Confederate monuments.

Who Tore Down This Frederick Douglass Statue? (New York Times)