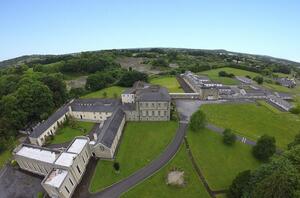 The abbey  was a mother and baby home from 1930 to 1970 run by Sisters of the Sacred Hearts of Jesus and Mary.

‘In the mid 1980’s Michael Donovan was working as a gardener in Sean Ross Abbey when he was asked by the Nuns to help landscape an overgrown area of scrub.

“ The tractor drove down this way and turned over the sod and I just noticed lots of small bones”.

That area where Michael found the bones is now a carefully tended burial ground known as the Angel’s plot. But that plot is not all it seems.

Nine years ago the nuns admitted 269 babies died in Sean Ross, a number that could plausibly be buried in this plot but it is now clear that over 1,000 babies died here.

So where are they? 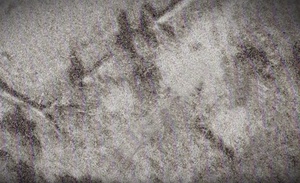 This Photograph (above) was taken in 1974 not long after the Nuns closed the Home, but there is no obvious sign of the Angel’s plot which the nuns now claim was a consecrated graveyard where they buried babies in individual coffins. 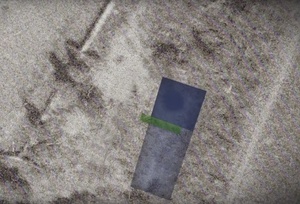 However, we’ve established that the area above this hedge (green line) which takes up the top third of the claimed angel’s plot actually contains a pit used by the Nuns for the mass burial of unbaptised babies and stillborns.

Toni Maguire, an archaeologist and anthropologist who specialises in the location and excavation of unmarked graves, says:

“They have no death certificates for these infants and those infants are not included in the 1000 plus babies for Sean Ross Abbey.”

With that area unavailable for the thousand burials, it is even clearer that the remaining area cannot be the true extent for the graveyard. 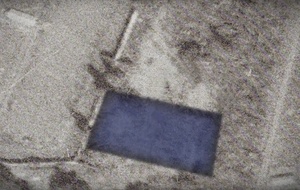 The most probable scenario is that it in reality extends to a faintly visible pathway (above) on the 1974 picture right up to the walled garden (at left).

And that is a cause of deep concern because of something else we discovered.

This plan produced by Tipperary Town Council was submitted to the Commission. A copy has found its way to us. 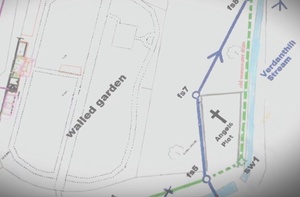 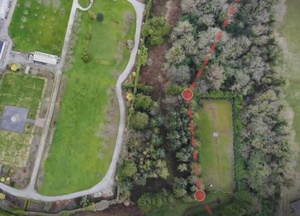 But as we have established that plan is wrong in several important respects. 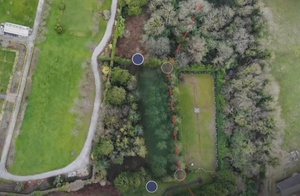 The inspection hatches are actually situated above  (marked in blue) and between them in a project apparently agreed between the Nuns and the council a sewage system has been constructed on land which may well contain child burials. 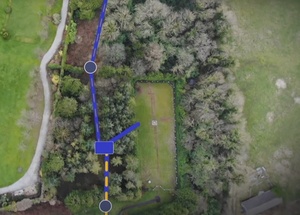 Our investigation suggests that the system above includes a settlement tank, an overflow pipe here and a sewage outlet pipe cutting through the probable burial grounds and emptying into another tank constructed within the current angel’s plot.

Disturbingly around the same time the sewage system was installed yet more damage was done to the potential burial grounds when they were planted with fast growing conifers.

“what they’ve done they have not planted the trees over the area where the pipes been laid, the roots obviously damaged the pipes and would do exactly the same thing to any burials that may be included in that land as well.”

In early 2019, the Commission ordered a ground penetrating radar survey of the plot followed by test excavations

They still have not said what they found but we can reveal the survey confirmed existence of a tank within the Angel’s plot.’