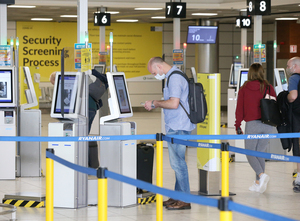 Under 2012 legislation, Social Welfare inspectors can question people at ports and airports, but only when they have “reasonable grounds” to believe there is a contravention of the Act.

However, according to multiple reports on social media and elsewhere this week, checking and questioning of people at airports has been widespread.

The Data Protection Commission (DPC) wrote to the Department of Social Protection in recent days asking it on what basis their inspectors had stopped and questioned people at airports, including asking them for personal information and personal public service numbers (PPSNs).

….The watchdog also said it is following up on queries made by individuals about whether the DEASP sourced information from passengers from other sources that allowed targeting of individuals for payment cancellation without any interaction with an inspector at a port or airport.

Absolutely delighted that all this being exposed for what it is. The state using its agents to engage in unlawful fishing expeditions at our ports.

67 thoughts on “Departure From The Norm”