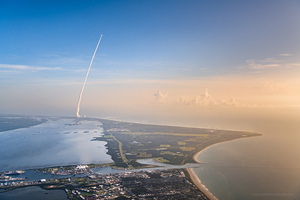 A rocket trail (captured from a small plane) against the morning sky above Florida’s ‘Space Coast’ yesterday. To wit:

It was July’s third launch of a mission from planet Earth bound for Mars. The Atlas V rocket left Cape Canaveral Air Force Station from Space Launch Complex 41 at 7:50am EDT carrying NASA’s Mars 2020 Perseverance Rover. The car-sized Perseverance is headed for a landing at Jezero Crater on the Red Planet in February 2021. On board the sophisticated rover is the Ingenuity Mars Helicopter.

2 thoughts on “By The Dawn’s Early Light”