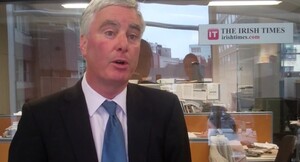 Stephen Collins of The Irish Times

Further to the government u-turn that has ensured Covid-19 Pandemic Unemployment Payment recipients will not have their pay cut if they travel to green-listed countries.

Stephen Collins, columnist  and former political editor of The Irish Times, is not happy.

The Government was entirely justified in withdrawing the pandemic payment for people who flout the advice not to travel abroad unless it is essential, never mind those leaving the country for good.

The vast majority of people have willingly obeyed the advice not to holiday abroad.

By allowing itself to be bullied into a U-turn by hysterical objections, the Coalition let down the vast majority of people who have shown a willingness to act in the common good even if that entails a financial sacrifice….

Politicians’ pay has always been an obsession of the Irish media for as far back as anybody can remember. In the overall scheme of things TDs and ministers are reasonably well paid, but then again so are public servants at all levels…

…Pandering to ignorance about their pay has done nothing to improve the standing of politicians.

Pandering to ignorance about TD pay does nothing to improve standing of politicians (Stephen Collins, Irish Times)

7 thoughts on “‘The Vast Majority Of People Have Willingly Obeyed’”