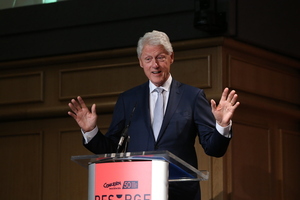 Former US president Bill Clinton in Dublin in 2018 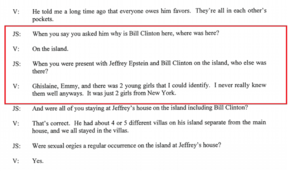 Documents about dealings between Ghislaine Maxwell and Jeffrey Epstein were publicly released.

Virginia Giuffre, who  accused Epstein of sex trafficking, said that she once saw former US President Bill Clinton on Epstein’s island with “two young girls” from New York.

In the questioning by lawyer Jack Scarola, Guiffre was asked, “Do you have any recollection of Jeffrey Epstein’s specifically telling you that ‘Bill Clinton owes me favors?'”

“Yes, I do,” Guiffre answered. “It was a laugh though. He would laugh it off. You know, I remember asking Jeffrey what’s Bill Clinton doing here [on Epstein’s island] kind of thing, and he laughed it off and said well he owes me favors.”

“He never told me what favors they were,” Guiffre continued. “I never knew. I didn’t know if he was serious. It was just a joke… He told me a long time ago that everyone owes him favors. They’re all in each other’s pockets.”

Scarola then asked if she was ever present with Epstein and Clinton on the island.

“Ghislane, Emmy [another girl who was allegedly a regular at Epstein’s house], and there was 2 young girls that I could identify. I never really knew them well anyways. It was just 2 girls from New York,” Guiffre answered, and said they were all staying in Epstein’s house on the island.

Men who Ghislaine Maxwell directed Virginia Giuffre to engage in activities with, according to Giuffre's deposition:

He Is Among Them

A Cause For Concern Worldwide

27 thoughts on “On The Island”