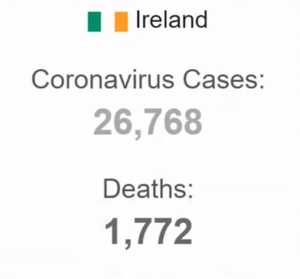 But how many people really died of Covid-19?

I’ve gone deep into the mortality numbers for Ireland and Covid-19. This is what I’ve learned.

The death toll in Ireland from Covid-19 is officially 1,773. But this includes people who died from other things and people who were presumed to have it.

Analysts for the Irish government counted death notices online and reckoned there were between 851 and 1290 excess deaths by mid-June, with the middle estimate being 1,072. 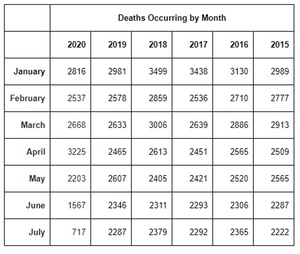 Instead of using online death notices, I have sought out and gained access to the latest official death registration data, as of the end of July 2020 (above). 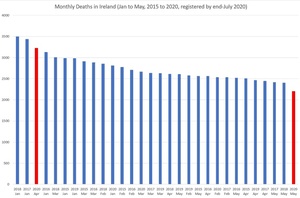 And here (above) are all of the monthly results from January to May for each year, ordered from largest to smallest. April 2020 and May 2020 are in red. 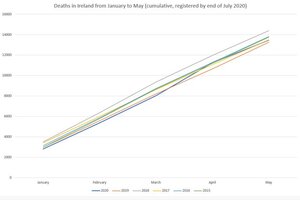 1) Not all deaths for 2020 are registered yet. Officially you have three months to register a death, but I can see from previous snapshots that deaths continue to be registered after three months.

2) The population is growing.

1) I use differences between the end-June database and the end-July database to estimate likely future growth of 2020 numbers for Jan to May, through the end of October.

2) I divide all numbers by the population for each year, to get the monthly mortality rates.

And May 2020 was about as dangerous as any other April or May.

What makes April 2020 different? It’s certainly shaping up to have been more dangerous than other Aprils.

And it was: the health system was shut down for many treatments, inpatients were asked to leave early, and many were too scared to attend A&E or their GP.

The best I can do for an initial estimate of deaths in Ireland caused by lockdown is to translate this ONS figure across.

Resulting estimate: 916 deaths caused by Lockdown in Ireland in April 2020.

I acknowledge there are large gaps in my analysis. Detailed research (and the passing of time) will provide in-depth explanations for many of the above issues. However, I don’t see why my estimates would not be in the “ballpark” of truth. Please share with me your corrections.

1) data does not yet support the claim that an extremely deadly virus (e.g. more dangerous than flu) was present and active in Ireland from March 2020.

45 thoughts on “Crunching The Numbers”