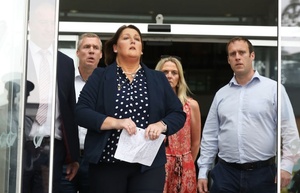 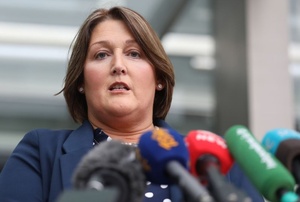 Caroline Donohoe, widow of Det. Garda Adrian Donohoe, addresses the media after a jury returned a majority verdict of guilty of Capital Murder on her husband’s killer, Aaron Brady.

After the longest trial in the history of the Irish State, Aaron Brady has been found guilty of of the Capital Murder of Det. Garda Adrian Donohoe outside Lordship Credit Union, County Louth seven years ago.

The prosecution alleged that Brady was the gunman who “wore the shooting as a badge of honour” when he moved to the US a few months later where he believed he was “beyond the arm of the law”.

In order to convict Brady of capital murder, the jury had to be satisfied beyond reasonable doubt that Brady knew he was shooting a Garda on active duty or was reckless as to whether or not he was a Garda.

On the sixth day of deliberations the five men and seven women, returned a verdict of guilty of capital murder.