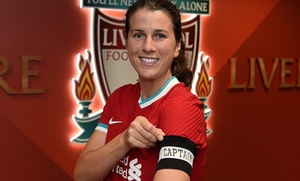 The 32-year-old Republic of Ireland international is preparing for her third season with the Reds after signing a new contract in the summer.

A centre-half who can also play as a defensive midfielder, Fahey has a wealth of experience in the game, with several league titles and FA Cups already secured during her career.

Calm Down, Calm Down

4 thoughts on “Liver Birds Are Go”