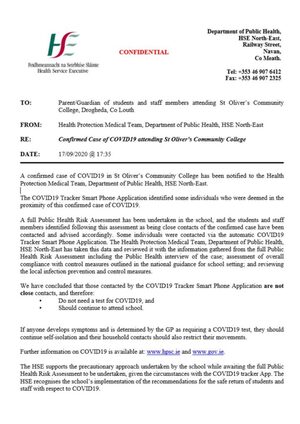 An email sent from the HSE to parents of St Oliver’s Community College in Drogheda, Co Louth on Wednesday evening

Teachers at one of the country’s largest second level schools have expressed concern at what they say are mixed messages they received from the HSE in relation to being deemed a close contact of a person with Covid-19.

St Oliver’s Community College in Drogheda closed to more than half its students after more than 30 of its teachers were alerted yesterday via the Covid tracker app that they were close contacts of a virus case.

They were advised to begin isolating immediately and to await a call from the HSE to arrange testing.

The alerts came after it was confirmed that a staff member at the school had contracted the virus.

However, while some teachers were tested this morning, others were told by the HSE that they did not have to isolate after all, or do a test, and were free to go about their business.

…The teacher, who is among those who received a close contact text alert, said: “We are all beside ourselves.

“It’s the shock of getting the alert and then being told it’s a mistake without any explanation as to what the mistake is. There is this idea that schools will stay open at any cost. We feel like cannon fodder.”

The fact that teachers who are marked as close contacts by the @HSELive app are having that designation removed by the Dept both endangers lives and undermines the public’s trust in the app. #edchatie @INTOnews pic.twitter.com/8x1dnQ9afP

“What We’ve Got Here Is State-Sanctioned Surveillance Capitalism”

The Cost Of Going Private

14 thoughts on “Meanwhile, In Drogheda”