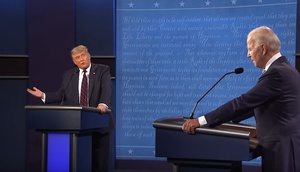 A highlight reel from the The first US Presidential debate between Donald Trump (top left) and Joe Biden.

Jake Tapper says his friend’s 6th grade daughter “burst into tears, had to run to bed” because she was “so appalled” by Trump during debate. pic.twitter.com/uNiQVsYkES