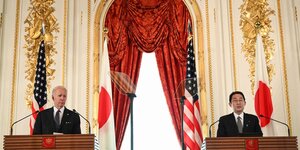 NEW: Pres. Biden says that the U.S. would intervene militarily if China were to invade Taiwan, saying the burden to protect Taiwan is “even stronger” after Russia’s invasion of Ukraine. https://t.co/2kjbrgiQId

Speaking alongside Japanese Prime Minister Fumio Kishida, Biden said any effort by China to use force against Taiwan would “just not be appropriate,” adding that it “will dislocate the entire region and be another action similar to what happened in Ukraine.”

China has stepped up its military provocations against democratic Taiwan in recent years aimed at intimidating it into accepting Beijing’s demands to unify with the communist mainland.

“They’re already flirting with danger right now by flying so close and all the maneuvers that are undertaken,” Biden said of China.

Biden: US would intervene with military to defend Taiwan (ABC) 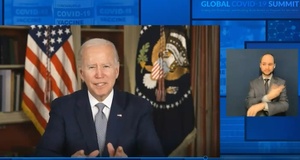 “We have to prepare for the next health crisis”

“Double down on our efforts to get shots in people’s arms” pic.twitter.com/4uMmAkEbJl

“Collectively, we are making significant new commitments to help keep up the fight against COVID-19 in 2022, protect the most vulnerable populations, and prepare for the next health crisis, because there will be others.

“You know, and the United States is going to continue to do our part.

“We’re standing up a new pilot program, working with the Global Fund, to expand access to rapid testing and antiviral treatments for people in harder-to-reach areas.

“And we’re increasing our support for a new Pandemic Preparedness and Global Health Security fund that will be established at the World Bank this summer with $450 million in seed funding.

“I particularly want to commend Indonesia and Italy for their leadership in helping make this fund a reality. And I’m encouraging other leaders to join me in — in upping their commitments.

“You know, we’re going to face, together, global health crises. This is not the last one we’ve had. It’s not a question of “if,” it’s a question of “when.” 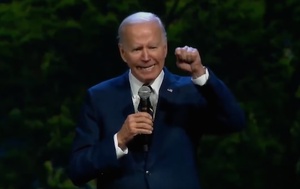 “Remember those long lines you’d see on the television – people lining up in all kinds of vehicles just to get a box of food in their trunk? How quickly we forget! People were hurting!

“And what did the MAGA crowd want to do?! Forget it! Forget it! God! This is the United States of America! The idea that people would have to wait in line an hour or an hour and a half to get a box of food in their trunk! It’s just unbelievable!”

Joe Biden: “They’re all our children .. They’re not somebody else’s children. They’re like yours when they’re in the classroom.” pic.twitter.com/ATNGGO594U

No. My children are mine.

And no one is sniffing them. https://t.co/hwFTkYQ7cN 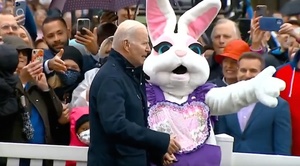 US President Joe Biden was chatting to visitors at the annual White House Easter Egg Roll event when the unlikely chaperone sidled up next to him.

Footage shows a person in a bunny suit seem to pull Mr Biden away mid-sentence as he was discussing Pakistan and Afghanistan.

White House press assistant Angela Perez tweeted a photo of herself in a bunny suit an hour before the event. 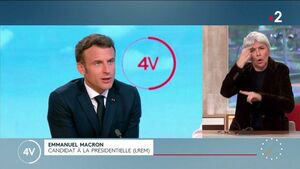 In a televised interview, the French President Emmanuel Macron stated that he did not want to use the term “genocide” for the killing of Ukrainians by the Russian military.

“I would be cautious with such words because these two peoples (Russians and Ukrainians) are brothers.”

President Joe Biden for the first time referred to Russia’s invasion in Ukraine as a “genocide” at an event in Iowa, and he repeated the term before boarding Air Force One to return to Washington, DC. 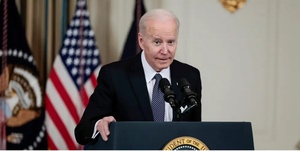 US President Joe Biden stood by his belief that Vladimir Putin should not be president of Russia, telling reporters that he made “no apologies” for his unscripted remarks.

“I’m not walking anything back,” the president said..

“I was expressing moral outrage, and I make no apologies,” he added.

Speaking in Poland at the end of his four-day trip to Europe on Sunday, Biden said of Putin, “For God’s sake, this man cannot remain in power.”

The line came at the end of a 27-minute speech and was ad-libbed by a president famous for doing so.

Leon Panetta says on CNN that Biden’s gaffe in Europe about regime change came about because Biden is Irish, and his instinct to internalize human suffering may have overwhelmed him to the point where he was not careful about what he said. Biden needs more discipline Panetta says 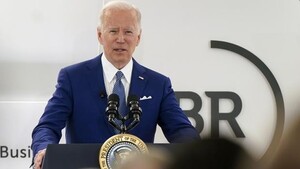 “As one of — as one of the top military people said to me in a secure meeting the other day, 60 — 60 million people died between 1900 and 1946. And since then, we’ve established a liberal world order, and that hadn’t happened in a long while. A lot of people dying, but nowhere near the chaos.

“And now is a time when things are shifting. We’re going to — there’s going to be a new world order out there, and we’ve got to lead it. And we’ve got to unite the rest of the free world in doing it.” 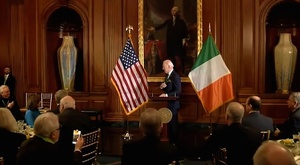 Biden: “Bless me father, for I’m about to sin. I just want you to know, I may be Irish, but I’m not stupid.” pic.twitter.com/TOFTs1u0OH

Joe Biden at the Annual Friends of Ireland Luncheon to celebrate St. Patrick’s Day. Taoiseach Micheál Martin was in isolation across the street after testing positive for the rona.

PELOSI: “I will be reading a poem written by Bono about Ukraine which you might find interesting.” pic.twitter.com/6AqHlpsTPP

Volodymyr Zelenskyy is the new St. Patrick… at least, according to a poem written by Bono and read Thursday by Nancy Pelosi. https://t.co/bHtaFAyfpl

Earlier: Rain On His Parade 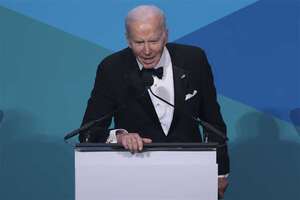 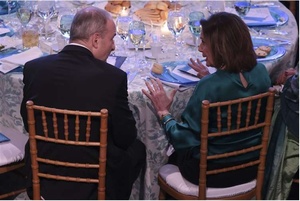 From top: US President Joe Biden; Taoiseach Micheal Martin with US Speaker of the House Nancy Pelosi at the Ireland Funds 30th National Gala at the National Building Museum in Washington DC earlier

Taoiseach Micheál Martin has tested positive for Covid-19. It means he will be unable to meet US President Joe Biden in person later today as part of the traditional shamrock ceremony.

Just before the positive Covid-19 test result was confirmed, Mr Martin had been listening to remarks from US President Joe Biden, who addressed the dinner on Wednesday evening.

Mr Biden had welcomed the Taoiseach to Washington and said he was looking forward to renewing their friendship on Thursday.

Mr Biden, who was greeted with a lengthy round of applause and repeated cheers from the audience, was in fine spirits as he addressed the gathering.

He welcomed Taoiseach Micheal Martin and recalled meeting him at the White House shamrock ceremony in 2009, when Mr Martin was foreign affairs minister and Mr Biden was vice-president.

“You’re Taoiseach, I’m President – what the hell are we going to do?”

Last year, Mr Martin had been forced to meet with the US President virtually due to the pandemic.

In front of an audience that included Speaker of the House of Representatives Nancy Pelosi and UK Secretary of State for Northern Ireland Brandon Lewis, Mr Biden spoke passionately about his Irish heritage but did not shy away from the multiple crises facing the world.

He said that Ireland was the only country in the world that was “nostalgic for the future”.