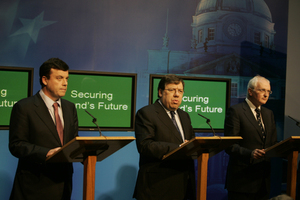 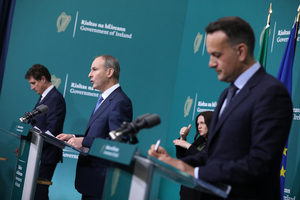 It has taken thirteen years but now, at last, we have a Climate Bill that is time and value specific as to how as country we should be reducing our carbon emissions.

It identifies sectors of the economy whose performance needs to change. Most important of all its provisions are judicible.

In 2010 then Green Party Minister for the Environment, John Gormley, introduced such a bill. It had a second stage debate in The Seanad before the bill fell with the government.

John Gormley’s successor as Minister, the antipathetic Phil Hogan, set about dismantling that bill of anything that would resemble achieving an effect. Goals were turned pieties, targets into aspirations.

A new bill, a limp toothless piece of legislation, was introduced by Alan Kelly in 2015, into an Oireachtas that by then had no elected Green Party representatives.

The context of where Ireland lies with carbon emissions has to be understood. We are the third worst performing country in the European Union, on a per capita basis. We are only being worse performed by Estonia and Luxembourg, two countries whose populations when added together is less than that of County Dublin.

Since 2011 Irish carbon emissions have been increasing on a year on year basis. That is up until 2018 when a 0.1% decrease was recorded.

There has no been no serious attempt to tackle Irish carbon emissions over the past decade. It has taken a Green return to government to again make this issue a political priority.

Its introduction now in the time of a pandemic, with many social and economic inequalities persisting, will be presented by some as a wrong sense of political priority.

It isn’t. Taking seriously then acting with intent on the climate emergency is the political imperative of our times. Pursuing the issue does not and cannot mean inaction on any other political priority.

Indeed an innovative approach to the climate emergency could be a better means to tackle ongoing social and economic inequalities. I know it is a matter of contention, even within the Green Party, but climate justice has to mean social justice.

Finally getting our act together on this could see the Irish economy become better positioned in becoming a go to place to reflect new best practice in a decarbonised world.

Social Justice will come about through a better allocation of scarce and finite environmental resources between developing and overdeveloped countries.

The same should occur within societies as those most affluent tend to be those who are most wasteful of environmental resources. In that sense a carbon levy is a progressive tax, as those who consume more pay more.

After years of running into walls I’m suddenly becoming possessed with a strange sense of optimism. I’m thinking this is something we can do. The necessary resources will be provided for it, and that those resources can be used productively.

For now that optimism is overcoming the green devil sitting on my other shoulder. He keeps telling me that others don’t want to know, that they can’t change what they are or their need to benefit from a depleting planet.

He may be right but damn him anyway. Nothing can change unless we try.

43 thoughts on “Dan Boyle: A Change Of Climate”