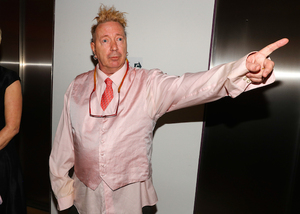 I am currently studying Creative Writing at NUIG. Recently we had an assignment for which I wrote a poem tackling the sudden onslaught of ex-punks turning to right-wing politics.

Anyways, only this morning did I see the headline saying that now John Lydon of the Sex Pistols has endorsed Trump, so I like to think my poem has suddenly become quite topical. Although I did in fact dedicate it to Tony Parsons of NME fame…

for Tony Parson and the Aged Punk

Don’t stab his eye, just leave it alone,
why make such a big deal of it all?
The kids are too radical, the kids can’t make change,
revolution was so much simpler in the seventies.

Leave out rioting for the trees and the grass
I’ll rock out about this rising carbon tax,
just forget about any slow rising tides
and you know Boris really ain’t so bad.

London’s calling in too many artsy types
who loved this stunting European hole,
too many fell in love with something they shouldn’t’ve fallen in love with,
Jesus there’s just anarchy in the UK.

Someone needs to disarm these crazy ladies
with their wet ass body parts,
when did music get so crude and graphic,
where did all the poetry go?

Fuck those bloody fucking sops,
those big ol’ drifts of snowflakes,
offended by everything we used to say
when there was a good fight to fight.

Three chords was all we needed
to make an absolutely tone deaf song,
now when I rock I’ve Facebook on my lap,
“Thatcher was actually pretty Punk you know”

The Authentic Sound Of Punk

45 thoughts on “The Boy Looked At Johnny”