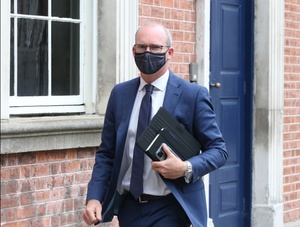 Further to last night’s cabinet decision to order nationwide ban on household visits and move three border counties to Level 4 restrictions amid warning that things won’t return to normal until a vaccine is found.

Speaking on RTÉ’s Morning Ireland, Minister for Foreign Affairs and Minister for Defence Simon Coveney said there needs to be collective action in terms of adhering to the new regulations “to turn this around”.

Mr Coveney described the “enormous numbers” in Northern Ireland is very worrying, and said that while there is a lot of cooperation between the two jurisdictions, the Government is anxious to do more and have a collective approach both North and South.

….Minister Coveney said there are a number of things happening, including discussions to trace cases across the border and the use of a Covid app that works in both jurisdictions.

He said the NI Executive gets its scientific advice from a different source to NPHET and there is not always consistency, but both governments are taking action to try and reduce the infections.

Mr Coveney also said he had worries for the GAA ahead of the resumption of inter-county action this weekend.

Collective action needed to ‘turn this around’ – Coveney (RTÉ)

11 thoughts on “In This Together”