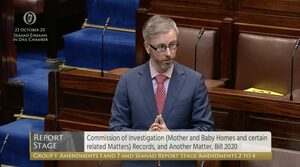 Minister for Children Roderic O’Gorman addressing the Seanad, sitting in the Dáil this afternoon

The Government has contravened European and Irish law with regard to the accessibility of personal data by voting to seal the records of mother and baby homes for thirty years.

The Data Protection Commission was consulted by the Department of Children ahead of the drafting of the new mother and baby homes bill regarding the Data Protection Impact Assessment it had commissioned concerning the legislation.

In passing the legislation on Thursday evening, Children’s Minister Roderic O’Gorman said that his advice from the Attorney General was that access to the records had been explicitly restricted by the Commissions of Investigation Act 2004.

However the Irish Examiner can reveal that this is entirely contrary to the observations provided to the Department by the DPC.

If this is in breach of privacy could we see @PresidentIRL make an art 26 reference to the Supreme Court before signing?

Fianna Fail’s Jennifer Murnane O’Connor in the #Dáil just now says she wants #UnsealTheArchive brought back before the House. Claims TDs “did not have the proper facts” when they voted last night. Couldn’t make it up 💀💀💀

The names of the senators that voted to seal the records of the survivors of the Mother and Baby Homes this evening.

I doubt many of those women have a vote in Seanad elections #StopTheSeal https://t.co/f3R6OkyabP pic.twitter.com/actsCw6FzI

Earlier: “I Didn’t Want To Ask Survivors To Wait More”

Yesterday: Simon McGarr: Sealing The Archive Would Be Impermissible In EU Law

Keeping An Eye On Zuckerberg

‘A Guarantee Of Absolute Confidentiality’