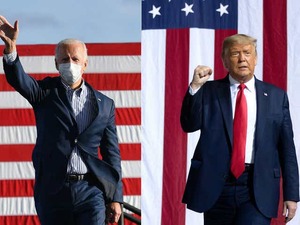 The future of Donald Trump should be answered by Friday, if not sooner. Three weeks ago I predicted Biden would win. Nothing I have heard since has convinced me otherwise.

According to Professor Michael McDonald’s excellent @ElectProject, at least 93 million Americans had already voted by Sunday November 1. In 2016 just over 136 million votes were cast.

In mid-October Prof McDonald predicted that early voting would hit 85 million and that the overall 2020 turnout would exceed 150 million. As his early voting turnout has already been surpassed, it is not unreasonable to expect his turnout prediction will be too.

Doubtless this will include many who did not vote for Trump in 2016. Republicans have been busy registering more Trump supporters in rural areas, but does anyone imagine that 20–25 million extra voters are turning out because they think President Donald Trump is doing such a great job?

The US presidential was always going to be a referendum on Trump. His handling of Covid19 has made it even more so. He is pleased this is all about him, but that is the big flaw in his campaign strategy: his ego. It is not just a risky strategy; it is a bad one when so many likely voters do not like or respect you.

Asked to rate the candidates, likely voters give Trump a score of 41% favourable and 57% unfavourable and Biden 55% favourable: 42% unfavourable. That is a 15% gap in favour of Biden. Biden’s unfavourable rating today is 10pts better than Hillary Clinton’s 52% rating – a rating that cost her: Wisconsin, Pennsylvania and Michigan.

Trump has bet the house, by which I mean other people’s money, on him getting the minority who like him to turn out disproportionately. Early polling figures point to that strategy failing. Trump’s future now depends on a huge polling day turn-out of Trump voters.

Bizarrely, Trump could manage to get more votes than he won in 2016. The GOP’s registration and get out the vote operation could bring out extra Trump votes, but with 20+ million additional voters they simply cannot catch up with, never mind, out poll Biden.

Biden will win the popular vote by a much bigger margin than Clinton did in 2016, the question is how his vote is distributed across the battleground states.

Trump won almost 3 million fewer votes than Clinton. His win was due to where he secured several hundred thousand of them, particularly Michigan, Wisconsin and Pennsylvania.
Trump must now win in every State he won in 2016.

That is a big ask for an unpopular President. Trump cannot afford to lose states – and right now he is likely to lose two or more.

So here are a few of the key states I’ll be watching on Tuesday night/Wednesday morning.

First is Florida. It is counting early votes now and expects to have a result on election night. If Trump loses Florida, it is over all for him. He is losing the support of seniors and suburban voters across and only held Florida by 113,000 votes last time (1.2%). I think he may just hold Florida, but the margin could be ultra slim.

Watch Georgia and North Carolina too. Both are showing early turnouts equal to 90% plus of their 2016 turnouts and both expect to count most votes on the night. Trump won these two states in 2016 and took their combined 31 electoral college votes. This time, both could swing to Biden.

Turning to North Carolina, polls here have Biden ahead by between 3 and 6%. This compares with Trump’s 2016 winning margin of 173,315 votes (3.7%). There is a big Senate race here too with polls favouring the Democrat challenger over the pro Trump Senator, Thom Tillis.

Trump’s 2016 winning trio of States: Pennsylvania Wisconsin and Michigan are obviously ones to watch, but none are expected to declare a result on the night, indeed Pennsylvanian electoral law says that it may not count postal ballots until the following day.

Biden is well ahead in all the polls in Wisconsin and Michigan. As I pointed out three weeks ago Trump won the suburban and rural districts in Pennsylvania in 2016 giving him a narrow 45,000 vote margin over Clinton across the State. Biden is still ahead here, but the race is tightening.

This is why Pennsylvania is now seeing so much big-name campaigning with both Trump and Biden holding several last-minute events here.

After you look out for the results in these States, as well as Texas, Arizona and perhaps Iowa and Ohio then the focus can move to an even more critical question: what happens after the election?

A UMass Amherst poll shows that 80% of likely voters are concerned about the possibility of election-related violence. On Wednesday I retweeted posts from Dutch and Spanish journalists based in Washington.

Both reported that a week before polling day stores and businesses surrounding the White House were preparing for Election Day by closing and boarding up their windows in fear of violence and looting.

The fears are well founded, especially when the President gleefully cheers the intimidation of Democrats in Texas and the Trump cavalcades blocking highways in New Jersey and New York.

This is the short-term impact. What about the long-term impact? America is divided. Deeply so. The only hope of uniting lies with the losing side accepting the legitimacy of the winner, but outside of a massive Biden landslide, that looks unlikely. Trump signalled on Sunday that he is ready to go to the Courts on Tuesday night to force an early declaration.

A Biden win that takes days to declare fuels Trump conspiracists to claim the election was stolen. The converse is also true. If Trump is to have a second term then it must be seen to be the will of the people, not the vindication of voter suppression or court interventions. There have been over 300 legal challenges in recent days.

The winner will face the challenge of leading a nation that is deeply divided by geography and demographics. That division will not just have its expression in raw political gridlock in D.C. but could, if handled badly, even see greater regional disconnection, even secession. #Calexit anyone?

70 thoughts on “A Referendum On Trump”