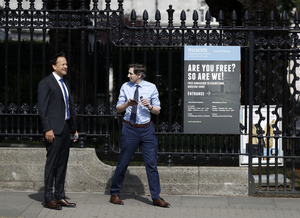 Late last Friday I pulled together some quotes and stats in anticipation of today’s column being just about the US presidential election. Then came Saturday morning and that Village magazine exposé.

So, today’s piece on the U.S. election will appear later today. I will first address the domestic elephants in the room.

The allegation that Leo Varadkar leaked a confidential government document to a friend is serious. Very serious. To describe the leak as “not best practise” is akin to Sinn Féin saying three £10,000 office grants ended up in their bank accounts “in error”. Using passive language does not make it better.

If anything, it makes it worse. It is like a poker player’s tell that shows the miscreant knows they did wrong, no matter how much they tell themselves otherwise.

To their credit – and this is not a phrase that flows easily from my keyboard – Sinn Féin have tried to deflate their problems with resignations from four party officials, including a Senator and an MLA.

It was a step in the right direction, but Sinn Féin still has questions to answer. Who controls these individual accounts? When did they know they received the payments? Were the repayments only made when journalists started asking about them?

The Taoiseach has even more pressing and serious questions. So might Minister Simon Harris. There are issues about the timelines. The draft agreement on GP contracts was not published until May 17, so why leak a copy a month earlier marked “subject to amendment/changes”?

As any experienced negotiator would tell you, leaking a draft to a third party in during a tense negotiation is not just dangerous, it is treacherous.

So, what made a negotiating neophyte imagine he knew better? How could leaking it to an IMO rival help? Did it help? Why was Minister Harris kept in the dark, assuming he was?

Both sets of questions must be fully answered. It is not an either/or. The wrongs done by one do not distract from those of the other, no matter how coincidental the timing. Both Sinn Féin and Fine Gael have profoundly serious questions to answer, so there is no reason for either to try to slide out of this to force the spotlight to fall on the other.

One other person with some questions to answer is Taoiseach Micheál Martin, though he owes the answers more to himself than the Dáil.

Whoever took the weasel phrases “best practice” and “inappropriate” from the Tánaiste’s statement and dropped them into the Taoiseach’s response did their boss no favours.

It is not in this Taoiseach or this government’s medium-term interests to downplay the Tánaiste’s action as a mere lapse of judgement.

If the Taoiseach really wants this government to be different from its immediate predecessor then he must ensure the days of governing by text and WhatsApp are over.

‘I Can’t Answer That For You’