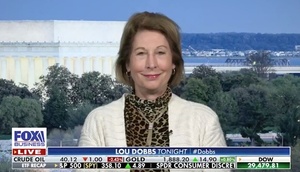 A ‘glitch’ in one Michigan county converted an estimated 6,000 votes for Trump to Biden.

Sidney Powell: “I’ve got a firsthand witness. In fact I’ve just emailed you an affidavit from a witness who can now be used publicly. It’s redacted in some places but he was present for the creation of the system for this specific purpose of falsifying election results for Hugo Chavez and then Maduro [In Venezuala]. They exported this all over Latin America . It’s the Smartmatic and Dominion systems that were built to do this very thing, for changing the results of elections… And he realised when things were happening the way they were here, particularly with the states the suddenly went down, they stopped counting the votes. It was because the need was so great to President Trump that they had to go in and do a separate reset on the machines to have them come out for Biden.”

Sidney Powell: “I do, indeed.”

Smartmatic, a company that was founded in Florida and is now based in London, denied financial connections to Dominion in a post on its website.

Yesterday: The Kraken Is Mighty

119 thoughts on “‘They Were Built To Do This Very Thing’”