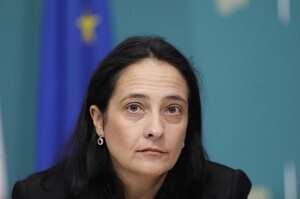 Asked why she shouldn’t, Ms Martin said there’s a process in place for judicial appointments and “that was adhered to”.

Earlier this week, it was revealed that the Taoiseach was not informed or involved in the process of putting Seámus Woulfe’s name to Cabinet and was not aware that at least three other candidates had expressed interest in the role.

Ms Martin said Ms McEntee explained to the Oireachtas Justice committee yesterday, when she gave a statement but didn’t take questions, that one name was brought before Government last July.

Ms Martin said “she [McEntee] considered expressions of interest and one name was brought before them”.

Ms Martin said it would be unprecedented for a minister to be brought before the Dáil to answer questions on a judicial appointment.

“I believe it would set a dangerous precedent to go into such detail on an individual appointment and I don’t believe that would serve the separation of powers well.”

Ms Carville then asked Ms Martin about the three judges who reportedly wrote to the Government seeking to be considered for the Supreme Court role but whose applications were not relayed to Cabinet before Mr Woulfe was selected.

Audrey Carville: “Do you know, though, Helen McEntee made a statement but she didn’t answer questions, For example, the three judges who wish to be considered for the Supreme Court vacancy, do you know how she became aware of their interest?”

Catherine Martin: “That’s something that I’ll be talking to Helen about. I believe, like any appointment, you know, I wouldn’t be surprised if there are other applicants. So, as standard, the Minister for Justice considered expressions of interest from serving members of the judiciary, other judges eligible for the position and the recommendation of JAB (Judicial Appointments Board) and then brought one name forward…”

Carville: “But did those judges contact her directly do you know?”

Martin: “There needs to be more consistency and transparency with this process and reform is needed and the Green Party would be seeking more transparency in relation to this. That is the process that is currently in place and that process would need to be reviewed and I think that the plan is now to move ahead with the Judicial Appointments Commission Bill to establish a single process. And that’s an acknowledgement that the change is needed.”

Carville: “The Taoiseach has said that he wasn’t aware that three actual judges were interested in the Supreme Court job. Did your party leader know?”

Carville: “Do you know if Leo Varadkar knew?”

Martin: “I can’t speak for Leo Varadkar. I can only speak for the Government of which I am part of and, of course, there’s always room for improvement and for more transparency. One name came before Cabinet but maybe there should be greater consultation with the leaders? With the leaders. But Cabinet time itself is not best spent, asking the Cabinet to deliberate on three, or four, or five names. But in the current Government, where we have a three-party coalition, I believe there’s greater room for consultation and transparency around that process.”

Martin: “As I said, I don’t believe that that would serve the separation of powers well. I think there’s a risk it would descend into Opposition politics for the sake of Opposition politics and we have to remember the reality of the very adversarial nature of Dail Eireann. A one-and-a-half hour, two-hour questions and answers in this might actually prove counterproductive and I would be worried that damage would be done.”

Carville: “OK, just a final question on this. Are you satisfied it wasn’t a political appointment given, because Fianna Fáil were taking the Attorney General’s job in the new Cabinet?”

Martin: “I’m satisfied that Minister McEntee, as she outlined yesterday, adhered and complied with a process that is in place. But having said that, I believe, and the opinion of the Green Party is, that there’s reform needed here…”

Mary Wilson: “Is there any reason, constitutionally or within this separation of powers, why the Justice Minister couldn’t now take questions and clarify the process that she mentioned in the statement yesterday around the appointment of Mr Justice Woulfe?”

David Kenny: “No, I don’t think there is. It doesn’t seem to me that the separation of powers concern that’s been voiced by the Government is a valid one. The Government has a function in appointing judges and the Government is accountable to the Oireachtas for the performance of its functions. And in terms of explaining considerations that might have been at play, or factors that might have been under consideration, in making a decision that’s now somewhat controversial, it would be seem to me to be entirely appropriate that the minister would be willing to answer questions on that point. 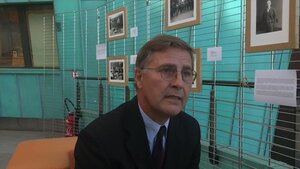 Bjorn Janson (above), Deputy Executive Secretary of GRECO – the Council of Europe’s anti-corruption monitoring body – spoke to RTÉ’s Morning Ireland about GRECO’s concern about the manner in which judges are appointed in Ireland.

“We welcome the establishment of the judicial council in Ireland, this was a major achievement and we now wait for this council to start working.

“…and developing a code of ethics for judges, for institutionalising training for judges, etc. Another thing that remains is about the appointment of judges in Ireland.

“When GRECO was in Ireland, doing this assessment visit back in 2014, we assessed how the system worked and we found out that the judicial appointments board, the JAB, was a good pre-selecting body as such, but it selected a large number of judges and just passed them on, passed on the list to the Government for the decision. Which made this system look a bit political.

“And the objective of GRECO is to establish independence of the judiciary as a preventive tool against conflicts of interest and corruption.

“What was stated in the report by GRECO very clearly was that the selection should lead to a priority of the most suitable candidates and that the whole process should also be transparent so that the Government, it would minimise political appointments in the system.”