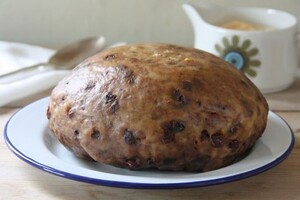 For those of you who don’t know what it is – clootie dumpling is a spiced pudding with dried fruit that is wrapped in a cloth known as a cloot and simmered in water or ” steamed ” for a good while.

Best served with custard or cream, it is not as rich as a sasanach pudd and no Scot I know is going to waste good whisky by throwing it over the top. Keep your dram in your glass Jimmy.

I like my Boxing Day cloot fried up in butter for breakfast with a fried egg on…trust me you’ll never look back.

The slightly jelly like ‘skin’ that gives it’s character that forms on the outside of the cootie is the result of being boiled in a cloth or cloot, don’t worry if you don’t have calico an old pillow case works just as well. Don’t use a terry like cloth or tea towel unless it has a nice dense weave.

Bring the largest pot you have of water to the boil, You’ll want to leave 2 – 3 inches of water from the top to make sure the dumpling will have room and room to float.
Now in a large mixing bowl combine all the dry ingredients (flour, sugar, spices, salt, baking powder, dried fruit and beef suet). In another bowl mix the eggs, milk and black treacle together with the grated apple. Then combine the wet mixture with the dry mixture.

Dip your cloot into the boiling pot of water to soak for a few minutes.

Wring it out to remove the excess water. Now spread the cloot over a large work surface and dust it well with plain flour.

The layer of flour does not need to be thick but make it even. The wet cloot and flour combine to form a protective glue-like waterproof surface so make sure the flour reaches far enough to the edges of the cloot, so that the flour will cover the whole dumpling when the cloot is drawn up around it.

Empty the mixture on to the cloot and draw up the material around it.

Tie it with string, wrapping the string twice around nice and tight but leave a bit of spare room at the top as the dumpling will expand a little.

Cut a long length of string so you can tie the excess on to the pot handles to suspend the cloot when it is submerged in the water.

Put the lid on and keep on a low simmer for 4 hours. Then transfer the dumpling to a baking tray.

Dry the dumpling in a 180˚C preheated oven for 15 – 20 minutes, unless you have a lovely roaring open fire that will do the trick ! When you first remove the cloot you will have a white glutinous skin which covers the surface of the dumpling but don’t worry, after it has been in the oven it will become darker and form a nice crust on the outside.