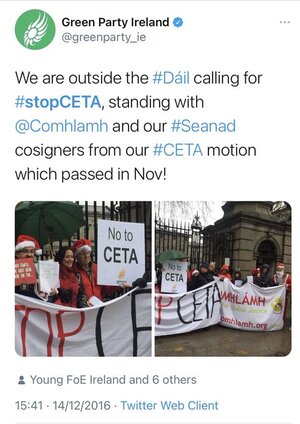 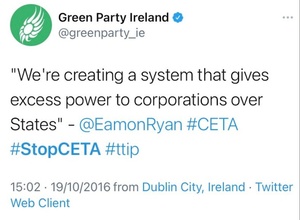 The first of these tweets is four years ago today. The same treaty (the EU-Canada trade deal) is down for ratification in the Dáil tomorrow, with the Greens now in government pic.twitter.com/1mSItEzq2M

“With this trade deal comes a very controversial mechanism which allows companies to sue an EU member state for potential profits lost if a Government decides to change their policies or regulations.

“This will be devastating for many reasons, including in the area of health and housing, but also in in relation to the Government drafting legislation and policies to tackle climate change and biodiversity. If a company feels a Bill or policy drafted to mitigate climate change might negatively impact on their profit margin, it could technically sue the Irish Government under CETA.

“Furthermore, all of this would be settled in special tribunals held outside our own justice system in a non-transparent manner. This is hardly appropriate in an age where transparency and due diligence is a basic requirement in a democracy.

“The chilling effect of this deal could be enormous as the Government is already wary of legislating strongly for climate action for fear of being held up in court. CETA will reduce the Government’s capacity for stronger decision-making, which is what we need in our fight against climate change.

“If companies can sue the Irish Government for compensation, not only will the taxpayer be out of pocket, but our ability to mitigate climate change and protect our biodiversity will be diminished. We cannot afford for that to happen.”

Stay In Der Own Leyen

‘This Party Has Made A Liar Out Of Me’