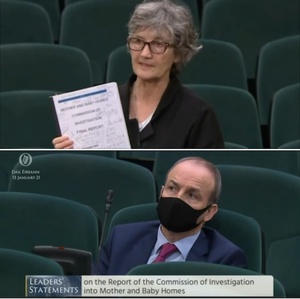 That was certainly the feeling. So much so that Leo Varadkar rowed in with all his titles to claim some of those brownie points, adopting a succession of suitable important hats in which to apologize from. He apologized as Tánaiste, as former taoiseach, as the leader of his party and, most notably, it being a wimmin thing, as a man. He couldn’t find enough titles to adorn himself in. He might have added that he was apologising as founder member of the Subbuteo boy’s club.

Many things happened when Catherine Connolly spoke. Many assumptions were swept aside as the cosy consensus of the political establishment was cracked open by her speech. It was like that scene in Fawlty Towers where Basil, having berated the assembled guests in the lobby, demands to know if any of them are unsatisfied with the service, banking on terror alone to win silence. And it does for a moment. But then one quiet voice says, I’m not satisfied.

The problem of course was that the apology was more about the giver than the receiver. As Catherine Connolly pointed out, the report itself was shoddy and lazy, and the manner in which it was leaked and in which none of the victims received a copy seemed to incorporate the very attitude that had under-pinned the attitude of the authorities at the heart of the report. An attitude of gross disrespect. And here it was again, posing as a saviour extending apologies.

Worse, the same official attitude refused to take responsibility, instead literally flinging all of “society” under the bus rather than owning up. And on top of that, claiming there was no evidence that the things which the witnesses had said had taken place had actually taken place. Meaning, the witnesses’ testimonies counted for nothing. Meaning, the witnesses still have no voice and are expected to simply do as they are told, and, presumably, be thankful that they have an apology at all.

What emerges is the sense that the same elite name-checked by Connolly, comprising the political class, the clergy, acquiescent media figures, GPs and county councils, is still essentially calling the shots, and that the politicians delivering this apology were doing so in such a way as to protect their former counterparts while also perpetuating a system of elitism and class disrespect into the brave new Ireland of official apologies.

Connolly described the report as an abuse upon abuse. The political gamesmanship surrounding the delivery of the report and the apology also revealed a “sure it’ll do” attitude. Connolly listed the various reports that have been issued down the years by the political class, as if each one was just another empty gesture. But with this one she apparently had seen enough.

While Catherine Connolly’s main criticism was what she saw as a betrayal of the women who had come forward in trust to share stories which, for most of them, they would prefer to keep buried; the litany of flaws concerning the report itself and the manner in which it was delivered, added up to a picture of an elite protecting a previous elite while short-changing those it was purporting to be protecting.

She criticised the language and writing of the report which she described as amateurish and inconsistent. This alone could be teased out as indicative either as an attitude of carelessness, or worse, as evidence of mediocrity in high places due to the natural outcomes of a rigged system.

The seemingly slapdash way in which the report was apparently cobbled together and in which copies were not delivered as promised to the victims, who had each gone through a personal trial of uncertainty and trust in deciding to tell their story, reeks of the disrespect that the elite of a former time had shown women and children imprisoned in reform homes and orphanages in the first place.

The sense is that there was only one result expected from the entire gesture: easy political brownie points accruing to the establishment.

Connolly in her quiet but angry speech described how county mangers got to decide that a woman becoming pregnant for a second time would be sent to a Magdalene laundry rather than the “care” of a Mother and Baby home; the desire to punish, unmistakable in the official act.

As if to underline the fact that the entire system was as much an unaddressed problem of class division and disregard as it is a problem of institutionalized misogyny, Connolly in her speech cites an arrangement where middle-class people could buy their way out of the system.

Overall, the effect of the report and the manner in which it was delivered, including even a leak for good measure, demonstrated that Ireland’s establishment does not in any way feel obliged to give voice to the voiceless. Instead, the entire show, like the system it was purporting to apologize for, had the air of adults talking above the heads of children. And like their counterparts before them, this political establishment blamed the victim, which, in this case, is us, “society”, the gillies still paying for the banking collapse.

As Una Mullaly pointed out in her article in the Irish Times, when “society” is to blame, no one is to blame, thus letting off the hook the entire establishment structure, which still exists, albeit in relatively truncated form. If it changed, when did it change? When Micheál Martin claims that “society” did this, what he really means is that today’s establishment and their historical counterparts are not responsible.

Connolly rejected the entire gambit out of hand. By doing so she revealed that very little in the relationship between the establishment and its victims has changed. For instance, where once we had stigmatized single mothers, we now have stigmatized homeless people, who are actually dying on the streets courtesy of government policy on social housing. Providing raw material for future reports and apologies.

Catherine Connolly’s honest and heart-felt dismissal of this political sideshow unmasked the game while also revealing that the report itself was an empty gesture, taken mainly for the political gain it might accrue to a shaky coalition of the old guard. A throwaway thing by an establishment that still sees itself as being above the reach of the people it purports to represent.

7 thoughts on “Eamonn Kelly: One Voice Raised in Anger”