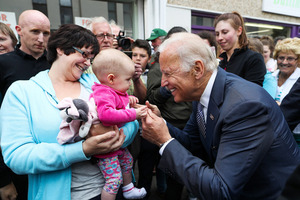 From top: Joe Biden in Ballina, County Mayo during his visit to Ireland as US Vice-President in 2016; Dan Boyle

I’m not expecting fireworks. There will and should be some activity during the first one hundred days of this new administration, but much of that will be trying to undo much of the damage done by Trump. After that the success of a Biden presidency should be gauged by how little the new President says or does.

The US needs to take a deep breath, maybe even go into hibernation.

The drama queens among may soon miss the errant theatrics of Donald Trump. We shouldn’t. He has, however, performed one useful task – he has exhibited and has personified the ugliness of part of the US character.

What was once a national confidence has become the deepest delusion. The USA Number One chants of so many Trump rallies were so indicative. The real fake news has been the belief that the US possesses something the rest of the world aspires to. It doesn’t.

It remains the hub of the global economy, but there is no guarantee as to how long it can keep that status. The challenge for any future US government is to manage how the country can maintain its preeminence without its historical dominance.

The denial of the Trump era has not helped that. The contradictions that have held the country together can no longer hold. There is too much disparity of wealth. Too much inequality in health and education. Too little granting of what for many in the rest of world are basic social and economic rights.

We get a lot of these things wrong here too, but not as wrong as they continue to be there.

One the proudest boasts made by those who support Trump is that he didn’t start a war. It is a hollow boast. US military involvement continued in many places where the US shouldn’t have been and has never needed to be. Some credit can be given for scaling back.

Where Trump has created turmoil has been within the US itself, a violence turmoil born of violent language and intent. As a man who has never been at peace with himself Trump has not been, and could never be seen as, a purveyor of peace.

Where a just war should be conducted is a war on ignorance and hate. The real legacy of Trump has been through his efforts is that each feeds the other.

If Joe Biden can achieve in this, unassumingly, he will have more than justified his election. This, however, will be no Camelot.

What there should be is placemaking. Repairing the damage that been caused while trying to achieve a more proper understanding of what the role, and place, of what the US should be.
There isn’t going to be a next American century but we should all continue to try to bring about better democracy.

That of course is a wider debate about the nature of information, who holds it and how it is distributed. A debate we are all struggling with. If there is any lesson we can be learning from the Trump era, it must be how close we can be to losing even the most basic elements of our democracy.

There are future Trumps whom we need to confront, before they can be what The Donald has been. This is a time for an ordinary Joe.

20 thoughts on “Dan Boyle: Time For An Ordinary Joe”