A gathering of teenagers commemorate Josh Dunne, who was fatally stabbed last week during an altercation on East Wall Road. Many of the teenagers at the gathering arrived on bicycles, and wore t-shirts featuring Josh. 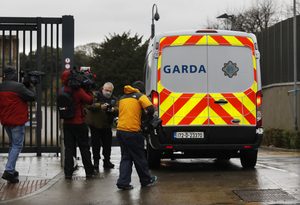 A Garda van believed to contain the man who has been charged in relation to Josh’s fatal stabbing arrives at the Criminal Courts of Justice, Dublin.

20 thoughts on “A Fallen Friend”